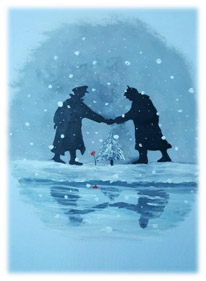 On a Small Peace

In 1914, the first year of WWI, over 600,000 men died.  That December, Pope Benedict XV begged the warring leaders of Europe for an official truce.  Or at least, he pleaded, let the guns fall silent at Christmas.  But they refused, saying the war must go on.

On the other side, British soldiers started singing Christmas carols, too.  And both sides shouted Christmas greetings at each other.  Then men started crossing the mud and barbed wire of no-man’s-land to shake hands and exchange gifts of food, tobacco and souvenirs with the enemy.  In some places they buried their dead together, and elsewhere they even played soccer.

There were many spontaneous ceasefires along the Western Front that Christmas, involving about 100,000 soldiers.  In some places the peace even lasted until New Year’s Eve.

This was a small peace inside a nightmare.  It was also a miracle, because the war resumed soon afterwards.  By 1918 some 40 million people had been killed or wounded and only a third of the truce participants actually survived the war.

In 2004, Christian Carion made a movie about this truce, calling it ‘Joyeux Noel’ (Merry Christmas).  It was nominated for an Academy Award in 2005.  Carrion wanted to make it in France, and he found a suitable site on a military reserve.  But permission was refused and he filmed it in Romania instead.  A French general had told him, ‘We cannot be a partner with a movie about rebellion’. [i]

The world has a real problem when peace is considered ‘rebellion’.

So why did this small peace occur?  The historian Andy Rudall, in his book ‘Neat Little Rows’, says this peace was only possible because of the Christian heritage of the two warring sides.  ‘Christmas is the pinnacle of the Christian calendar,’ he said, ‘and everyone knows what it’s about.  It’s about Jesus.  It’s about reconciliation…’

And it’s about peace.

In today’s Gospel, Jesus gives his disciples (that’s us) a new law:  we must love our enemies, even when they hate and curse us and treat us badly.

Now, this is a big ask.  It’s not easy to love someone who’s bullied, mocked or betrayed us.  It’s hard to ignore the bruises and scars when we’re hurt or abused or stabbed in the back.  And yet that’s just what Jesus tells us to do.  Like those WWI soldiers, he’s calling us to leave our trenches, to cross no-man’s-land and to shake hands with the enemy.

Agape is deliberate love, a love based on the will. This is what Jesus is calling us to do.

Our basic nature is to resist that, and there is a certain temporary satisfaction in turning away from those who hurt us.  But I’m sure we can all see the benefits of letting go of our grudges for the sake of peace.

So, how do we love our enemies?  Well, firstly we need to remember what kind of love Jesus is talking about.  The Greek language has several words for love.  There’s storge, which means natural affection.  There’s eros, or romantic love.  And there’s philia, the love of friends.  These three forms of love are all based on our emotions and they come naturally to us.

So, someone may really annoy us, but for the sake of peace we decide to agape them.  How do we do that?

In her book ‘How to Love People You Don’t Like’, Lynn R Davis says that you don’t have to like someone before you love them.  Then she suggests 51 ways to follow Jesus’ command to ‘love your enemy’.  Her suggestions are very practical, and they include: being civil, being polite and truthful, avoiding conflict, controlling your tongue, forgiving them, encouraging and supporting them, learning from them, interceding for them and keeping the peace, among others.

The tagline of the movie ‘Joyeux Noel’ says, ‘Without an enemy there can be no war’.

All it takes is a decision.

A decision to love others, just as Jesus loves us.