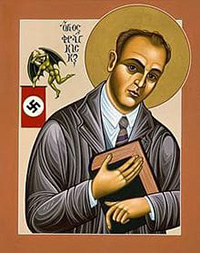 On a Hidden Life

Have you heard the story of Franz Jägerstätter? He’s the simple Austrian farmer, born in 1907, who features in Terrence Malick’s film A Hidden Life (2019). [i]

In his youth, Franz was considered a ruffian, wild in his ways and always ready for a fight. But by 1936 he changed. That’s when he married his beloved Franziska and they travelled to Rome for a papal blessing.

Together, they had three daughters, and Malick’s movie depicts them living a blissful life on his farm high up in the Austrian Alps. Franz once said, ‘I could never have imagined that being married could be so wonderful’.

He worked hard and often gave food to the poor. He also became very prayerful, often saying the Rosary while ploughing, or singing hymns while tending the cows. He spent hours learning about his faith and he served as sexton at his local church.

But when Nazi Germany annexed Austria in 1938, Franz feared the worst. He was aware of Nazi cruelty and he began reflecting on what it really means to be a Christian in an unchristian world.

He refused to support Nazi fundraisers and he avoided the local alehouses because he didn’t like arguing with his neighbours about fascism.

In 1940 and in 1941, he reported for military training but each time was allowed to return home because he was needed on the farm. In 1943 he was conscripted again, but this time he refused to swear loyalty to Hitler. He also refused to serve with a weapon because of God’s commandment ‘to love your neighbour as yourself’. He thought that fighting and killing so that Hitler could rule the world was a sin.

He was willing to serve as a paramedic, but he was imprisoned instead. Everyone thought he was mad, and only his wife Franziska remained supportive. ‘If I hadn’t stood by him,’ she said, ‘he’d have had no-one at all.’ [ii]

But Franz was unshakable. He wrote to his pastor: ‘If so many terrible things are permitted by this terrible gang, I believe it’s better to sacrifice one’s life right away than to risk the danger of committing sin and then dying.’ [iii]

In Matthew’s Gospel today, Jesus says his famous line: ‘give to Caesar what belongs to Caesar, and to God what belongs to God’. What he’s basically saying is that as Christians, we have dual citizenship. We belong to our country and to the Kingdom of God. We receive benefits from both, and we have responsibilities towards both.

In saying that we must give to Caesar what belongs to him, Jesus is assuming that what Caesar wants of us is reasonable. He’s not giving Caesar a blank cheque. But as we know, secular governments do sometimes expect us to support laws and policies that are morally incompatible with our faith. Some examples include euthanasia, assisted suicide and abortion, but there are many others as well, depending on where we live.

Here we have a duty to put God first, because our most important loyalty is to him.

Franz Jägerstätter once wrote, ‘It’s true that Christ commanded that we obey our secular rulers. But I don’t believe he ever said we must obey such rulers when they command something that is actually wicked.’

He also wrote, ‘I cannot believe that we Catholics must make ourselves tools of the worst and most dangerous anti-Christian power that has ever existed.’

In 1943, on the night before he was executed in Berlin, Franz was invited to sign a document that would have saved his life. But Franz pushed it aside and said, ‘I cannot and may not take an oath in favor of a government that’s fighting an unjust war.’ [iv]

In 2007, Pope Benedict XVI beatified him in the presence of Franziska.

At the screening of this film in the Vatican last year, Terrence Malick described Blessed Franz Jägerstätter as a martyr of freedom. He’s a martyr, he said, because he chose to be faithful to his conscience. As his father-in-law says in the film, ‘it’s better to be a victim of injustice that to perpetrate an injustice’.

Malick also noted the incredible faith, strength, sacrifice and witness of Franz’s wife Franziska. He said she’s a martyr just as he was, supporting him to the last breath, despite the pain.

Today our secular institutions no longer conduct themselves according to the Word of God. Whether something is right or wrong now so often depends on individual whim, or simple voting. As Christians, this presents us with significant moral challenges.

May we learn from the remarkable courage of Franz Jägerstätter and be guided by our own good Christian consciences.

As St Thomas More said just before his own execution: ‘I die the king’s good servant, but God’s first.’ [v]

[i] This film takes its name from the last paragraph of George Eliot’s novel Middlemarch: For the growing good of the world is partly dependent on unhistoric acts; and that things are not so ill with you and me as they might have been, is half owing to the number who lived faithfully a hidden life, and rest in unvisited tombs.