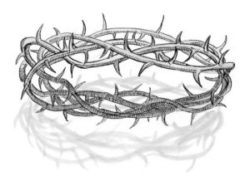 On the Silence of the Lamb

During the Passion of Jesus Christ in Matthew’s Gospel, Jesus is subjected to the most cruel and inhuman abuse.  He is falsely accused, insulted, scourged, beaten, mocked, robbed, spat upon and crucified.

Some think that silence in the face of adversity is weakness, but silence is actually more complex than that.  The acoustic ecologist Gordon Hempton defines real quietness as presence – not an absence of sound but an absence of noise, for we take in the world through our ears. [i]

In Sanskrit, the word used is Mauna or Maunitva, which is not mere absence of sound.  It’s silence of the mind which is essential to the spiritual life.

He said that from silence comes thought, from thought, the ego, and from ego, speech.  So, if speech is effective, how much more so must be its source? [ii]

During his public ministry, Jesus often invites his disciples to ‘come away’ with him to a quiet place (Mk.6:31; Mt.11:28).  He knows that it’s vital for his disciples to periodically rest, refresh and refocus themselves by spending some quiet time in prayer.  He also knows that being held in the loving embrace of his heavenly Father is both healing and strengthening.

So, in his silence, Jesus isn’t being weak or even passive-aggressive.  He’s actually in communion with his Father, drawing on the strength he needs to understand and endure this terrible torture (Jn.10:30).

At the same time, he’s also expressing his authority.  Caiaphas, Pilate and Herod are powerful men who expect answers, but Jesus says almost nothing to them.  They find Jesus’ silence unsettling, for it reveals his power over them.

Indeed, the few words Jesus actually does say only serve to affirm his divine authority.  He tells Caiaphas the high priest that he’s the Son of God who will be seated at the right hand of God (Mt.26:63-64).

At his first appearance before Pilate, Jesus confirms what Pilate has said, that he’s the King of the Jews (Mt.27:11)

At his second appearance, Jesus tells Pilate who’s truly in charge: ‘You’d have no authority over me if it were not given to you from above’ (Jn.19:11).

And when he’s cruelly nailed to the Cross, he whispers, ‘Father, forgive them for they don’t know what they’re doing’ (Lk.23:34).

In all this, however, Jesus knows he’s not just an innocent victim.  He’s also fulfilling ancient prophecy (Mt.26:52-54).  It was Isaiah who foretold of the suffering servant ‘despised and rejected by others’, who would be ‘wounded for our transgressions, crushed for our iniquities’ and led ‘like a lamb to the slaughter, and like a sheep that before its shearers is silent, so he did not open his mouth’ (Is.53:3-7).

And of course, what follows is Jesus’ extraordinary and most glorious Resurrection.

Certainly, his accusers wouldn’t listen to him anyway, but it’s Jesus’ Resurrection that finally explains his silence. Jesus has unshakeable faith in his Father and, despite the unbearable pain, he knows that in the end he’ll be okay (Deut.31:6; Jn.3:16; Mt.28:20).

That’s the lesson Jesus wants us to learn – that if we have deep faith, we’ll be okay, too, despite our everyday challenges and troubles (Josh.1:9; Rom.8:38-39).

We live in a noisy world, full of technology that’s constantly demanding our attention. And even when there is a moment’s peace, we so often reach for our digital devices or we start talking.  We actively work to avoid silence.

Yet, in our hearts we know that’s wrong.  Pope Benedict XVI once observed: ‘We are no longer able to hear God – there are too many different frequencies filling our ears’. [iii]

Michael Casey, in his book Balaam’s Donkey, says that silence brings three benefits.  Firstly, it makes us more aware of our inward enslavements and addictions and it motivates us to free ourselves from their grasp.  Secondly, by giving us an opportunity to consider, it helps us choose the most life-giving path.  And thirdly, it stirs up in us the energy to go beyond our comfort zone and venture into new territories.

Casey says we all need to recognise the value of silence, and to find more opportunities to be quiet and still. For silence is a source of empowerment; without it we are lost. [iv]

And St Teresa of Calcutta said we need to find God, but he cannot be found in noise and restlessness.  God is the friend of silence, she said.  ‘See how nature – trees, flowers, grass – grows in silence.  See the stars, the moon and the sun, how they move in silence.  We need silence to be able to touch souls.’

Next Sunday is Easter – the climax of our Christian calendar.

Let’s use this time to find some sweet and sacred silence in our lives.