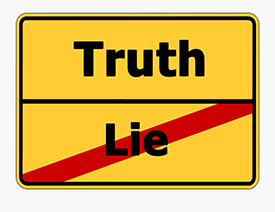 On Truth or Lies

In 1974, the Russian dissident Aleksandr Solzhenitsyn published an essay, Live Not by Lies, in which he encouraged Russians to never support the lies of communism.

The Soviet secret police responded immediately, by breaking into his apartment, arresting him and expelling him from the country the very next day. [i]

Ten years later, in communist Poland, three government agents faked a car breakdown and flagged down Fr Jerzy Popiełuszko. When he stopped to help them, they beat him savagely, tied him up, locked him in the boot of their car and dumped him in a reservoir where he drowned.

Why did they do that? It’s because Fr Jerzy had fearlessly preached the truth. ‘It’s not enough for a Christian to condemn evil, cowardice, lies and the use of force, hatred and repression,’ he said. ‘He must always be a witness to and defender of justice, goodness, truth, freedom, and love.’ [ii]

Totalitarian regimes always try to control what people think, believe and do. They don’t like people knowing the truth of what’s really going on.

When the Soviet Union collapsed in 1989, many people thought that was the end of totalitarianism. But they were wrong. Today, the Chinese Communist Party is actively using technology, prison camps and fear to control its own people, and it’s bullying countries like Australia to bend to its will.

Rod Dreher, in his book Live Not by Lies: A Manual for Christian Dissidents (he took this title from Solzhenitsyn’s essay) warns us of a soft-totalitarianism that’s spreading through post-Christian Western nations. [iii]

This soft-totalitarianism is basically atheism with a smiley face, and it expects us all to accept an ideology that’s incompatible with our Christian faith. It’s presented as helping and healing, and it uses words like ‘diversity,’ ‘inclusivity,’ ‘equity,’ and other egalitarian jargon, but beneath it all is a hatred of anyone who thinks differently. It’s especially hostile towards Christianity, because it doesn’t believe in objective truth or forgiveness or repentance. And it thinks that good and evil can simply be measured by whoever controls the power.

Pope Benedict XVI has described this as a ‘worldwide dictatorship of seemingly humanistic ideologies’, that pushes dissenters to society’s margins. ‘It’s a manifestation of the spiritual power of the anti-Christ,’ he says.

Dreher says this new form of totalitarianism won’t be imposed with rifles, but it will come upon us gradually, using online technologies and popular opinion to nudge us all into line.

He also predicts that it will be like the Social Credit System that China is now using to collect data on people, to pressure them into behaving in certain ways.

It will be a time of painful testing and even persecution, he says, and lukewarm or shallow Christians will find it hard to put up any resistance.

Dreher admits that he had thought the menace of totalitarianism had passed. But several men and women who’d survived communist oppression told him that they thought Americans were ‘hopelessly naïve’ in not recognising the ‘pre-totalitarian’ conditions of their country.

One professor said to him: ‘I was born and raised in the Soviet Union, and frankly I’m stunned at how similar some of these developments are to the way Soviet propaganda operated’.

Another professor, from Czechoslovakia, said that he began noticing a shift a decade or so ago: friends would lower their voices and look over their shoulder when expressing conservative views … they’d constantly scan the room to see who might be listening.

Many Western societies today are vulnerable to soft-totalitarianism, because so many people are only interested in their own comfort and happiness. They’ve lost their Christian backbone.

‘One of the biggest mistakes people make,’ Aleksandr Solzhenitsyn said, ‘is assuming that totalitarianism can’t happen in their country.’

So, how should Christians respond? Dreher says that Christians today must dig deep into the Bible and church tradition, and start to understand how and why today’s self-centred post-Christian world is being set up as a rival religion to authentic Christianity. He says we must put our spiritual lives in order and begin to mount a resistance.

In today’s Gospel, John the Baptist is in the desert, calling us to change the way we live and to prepare ourselves for the coming of Christ.  This call is urgent, because in Luke 13:5, Jesus says that unless we change the way we think and live, we ‘will all perish’.

But why should we change?  St Peter tells us why.  He says that the day of the Lord will come upon us like a thief, when we least expect it.  And when that time comes, it’s important that God finds us ready for him ‘without spot or blemish, and at peace’ (2Pet.3:10-14).  Our eternal life depends on it.

So, here’s the choice: either we stand tall and prepare ourselves for the coming of Christ, or we allow ourselves to be seduced into a totalitarian trap.

Which do you choose?