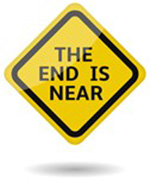 On the Prepper’s Handbook

Today they’re known as preppers, or survivalists, and they’re preparing for the end of the world.

Whether it’s an asteroid strike, nuclear war, climate chaos or some other disaster, they’re all convinced that global catastrophe is coming, and they’re determined to survive. They’re readying themselves by installing underground bunkers and stockpiling food, ammunition and other supplies, and their plan is to ‘ride out the storm’ until life returns to normal.

None of this is new, of course. Ever since Jesus first warned that the world will end one day, countless people have been trying to anticipate the event.

In 1501, the Renaissance painter Botticelli was convinced that he lived in the end times, and he hid lots of messages about the world’s end in his painting Mystic Nativity. [i]

In 1524, when the German mathematician Johannes Stöffler predicted a massive worldwide flood, one man built a three-storey ark. [ii]

And in 1910, some people were sure that the poisonous tail of Halley’s Comet would destroy the world as it flew past. [iii]

So far, they’ve all been wrong.

As Christians, we know that our earthly lives are temporary, and we accept that the world will end one day. Jesus confirms this in Mark’s Gospel today. But he also says that even he doesn’t know the day or the hour when the world will end; only his Father knows. So why are these people trying to guess what even the Son of God doesn’t know?

In Luke 21:8, Jesus says, ‘Watch out that you’re not deceived. For many will come in my name, claiming… “The time is near”.’ Don’t follow them, he says.

And St Paul says there’s no point waiting for the end because Jesus will only return ‘like a thief in the night’ – when we least expect it (1Thess.5:2). So, there’s no point guessing when that might be. It’s wiser to listen to what Jesus is trying to tell us.

In today’s Gospel, he assures us that, like a good shepherd, he will one day return to gather up the elect – the scattered people of God – into one community. And he says, ‘The sun will be darkened (and) the moon will lose its light…’

Now, it’s the sun that gives us our years, and it’s the moon that gives us our months. So, without the sun and the moon, time as we know it will end.  But that doesn’t mean the end of everything. Rather, Jesus is talking about a new beginning, and a new creation.

Now, this is what we should be preparing for. As Christians, our challenge isn’t just to get ready for the next emergency; it’s to prepare for eternal life. And the way to do that isn’t by installing bunkers, but by opening our hearts, strengthening our faith and gathering as much grace as we can, while we can.

It’s also by focusing on those around us, and not just on ourselves.

In Matthew’s Gospel, Jesus says that at the end of time, when the Son of Man comes in his glory, he’ll be separating the sheep from the goats (Mt.25:31-46). The sheep, of course, are those who cared for ‘the least of his brothers and sisters’, by giving them something to eat, something to drink and something to wear when they needed it. The goats are those who were too selfish to bother.

Our goal is to be counted among the sheep, not the goats.

So, here’s the point: Everything we need to prepare for eternal life can be found in the Gospel, for it’s the ultimate handbook for Christian preppers.

The Gospel is full of inspiring stories and practical advice which together present the great story of Jesus Christ, who not only shows us the way to heaven, but through his Holy Spirit also helps us get there.

But to achieve this, we must stop being so passive. We must take our faith actively in hand and develop it. We must get to know Jesus Christ personally and do all we can to follow him.

The time for passive Christianity is over.

So many of today’s doomsday preppers focus on fear. But St Augustine tells us that fear is the enemy of love, and ultimately, love is what we seek.

The place to find it is in Jesus Christ, because God is love itself (1Jn.4:8).

When we follow the Gospel and that last day comes, we’ll find that there’s nothing else left for us to do.

For we’ll already be well prepared.