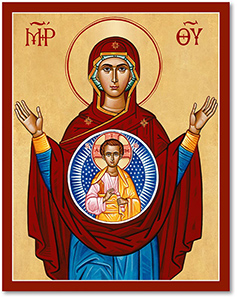 On Giving Birth to Jesus

Today, on the last Sunday of Advent, our attention turns from John the Baptist to Mary, the Mother of Jesus. Both John and Mary were pivotal in paving the way for the coming of Jesus. John announced his coming, but Mary actually carried Jesus into this world.

The Church has always venerated Mary, because she is the Theotokos (the Mother of God), who is central to our Christian story. But in ancient Israel the king’s mother was always considered special.  She was known as the Gebirah, the ‘Great Lady’ or ‘Queen Mother’, who always had a throne next to her son and who had great influence over him. She was always deeply respected.

And that’s why, after the Crucifix, the most common Christian image is that of the Madonna and Child.

Today, let’s look closely at one Madonna image: the icon of Our Lady of the Sign, and reflect on what it’s saying to us.

This style of image is ancient, and was found in first century Christian catacombs. It shows Mary during the Annunciation, at the moment in today’s gospel when she says ‘Let what you have said be done to me’ (Lk.1:38). She’s facing us directly, with her arms raised in an ancient gesture of prayer, and she’s presenting her son Jesus to us, at the moment of his conception.

Jesus isn’t shown as a baby, however. He’s a mature person dressed in fine robes, indicating that he’s both human and divine. Indeed, Jesus is the only person in history who chose his own biological mother.

Here, we see Jesus inside a circle, a medallion, which represents Mary’s womb.  In ancient times, subjects of the imperial court typically wore an image of their king embroidered on their breast as a sign of loyalty. Slaves also wore metal medallions around their neck with an image of their owner. [ii] In the same way, this icon reveals the Blessed Virgin Mary’s eternal love for, and loyalty to, her son Jesus.

Jesus’ golden clothes and the red colour symbolise his divine glory, and the blue represents our earthly home. Jesus’ right hand is raised in a blessing and the scroll he’s holding symbolises his teachings.

Inside Jesus’ halo is a cross, representing his crucifixion, bearing the words ‘I am’. This is the answer Moses received on Mt Sinai when he asked God his name. God replied ‘Yahweh’ in Hebrew. In English, that’s ‘I am who am’ (Ex.3:13-14).

The letters MP-ΘY inscribed above Mary are an abbreviation of the Greek for ‘Mother of God’.  The initials IC-XC above Jesus are the first and last letters of his name in Greek.

The stars on Mary’s forehead and shoulders symbolise her perpetual virginity and they highlight her unique status as the only mother of a divine child.

The golden cuffs on her sleeves point to her royalty and they indicate that she’s constantly interceding for people in need.

But where does the name, Our Lady of the Sign, come from? It comes from Isaiah’s prophecy: ‘Therefore the Lord himself will give you a sign: Behold, the virgin shall conceive and bear a son, and will name him Emmanuel (Is.7:14).

Now, some people claim that Mary is but a distraction on our path to Jesus. But in truth, everything about Mary points to him. Outside the Trinity, no-one is closer to Jesus than his mother, and her life mission has always been to reveal Jesus to the world.

This icon, therefore, serves as a sign; indeed, it’s an invitation to each of us to do exactly what Mary did: to bring Jesus to birth in our godless world.

Jean-Pierre de Caussade, in his book ‘Abandonment to Divine Providence’, says that every person’s life contains the hidden life of Christ.  Our challenge, like Mary, is to open ourselves up to him, to discover Christ’s mysterious presence, and to give birth to him (cf. 1Cor.6:20; Gal.4:19).

As Meister Eckhart once said, ‘What good is it that Christ was born in a stable in Bethlehem over 2,000 years ago if he is not also born in me?’

When Mary said Yes to God, her response was a significant turning point for the world.

When each of us personally answers Yes to this very same invitation, it not only transforms our own lives; it can also transform the world around us.

What, then, can you do to give birth to Jesus? How can you open yourself up to him and carry him into your home, your family, your workplace, your neighbourhood, your school?

Ask her now to help you give birth to him.