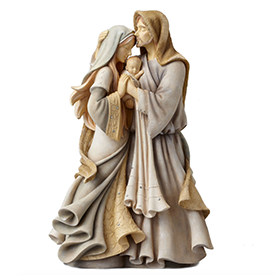 In the Scriptures, and in the Church’s tradition, it’s Jesus, and to a lesser extent Mary, who get all the attention, while Joseph is always hidden in the background. Today, let’s consider St Joseph. What kind of man was he, and what can we learn from him?

We actually know very little about this man, although there are a few clues. Joseph isn’t quoted at all in Scripture, and he doesn’t appear in Mark’s Gospel. However, he is mentioned in Matthew and Luke, and John refers to him only briefly (Jn.6:41-51).

As a pious Jew, Joseph would have worked 6 days a week. He’s usually described as a carpenter, but in the Greek, Matthew calls him a tekton (Mt.13:55). A tekton works in physical construction and repair, so he’s more likely an artisan, stonemason or builder, working with whatever materials were available, including stone, wood, metal, cement and clay.

Joseph lived in Nazareth, about an hour’s walk from Sepphoris, the wealthy Jewish city that was King Herod’s capital in Galilee. He could well have worked there.[i]

And like most craftsmen in the area, Joseph probably learned some Greek and perhaps Latin to serve his customers. As a native of Nazareth, he spoke Aramaic and as a faithful Jew he would have known some Hebrew.

Matthew tells us that Joseph was a descendent of King David, so he had royal blood (Mt.1:1-16). However, he wasn’t rich, for we know that he could only afford a pair of turtledoves to offer as sacrifice in the Temple (Mt.2:24).

Artists have often portrayed Joseph as an old man, but the mystic Maria Agreda says he was 33 when he was betrothed to Mary. In the culture of the time, bridal couples lived apart for the first twelve months after betrothal. It was during this time that Mary became pregnant by the Holy Spirit. [ii]

Joseph was distressed to learn of Mary’s pregnancy, and he planned to divorce her quietly to spare her any shame. But an angel appeared to him in a dream, saying ‘Joseph, son of David, don’t be afraid to take Mary your wife into your home’ (Mt.1:18-25).

Joseph realized that these puzzling events were part of God’s plan, and although he really didn’t understand, he agreed to cooperate. Like Mary at the Annunciation, he trusted God and he allowed himself to be led.

And he didn’t disappoint. He protected his family during Herod’s ‘Slaughter of the Innocents’. He provided for his family when they escaped to Egypt, and he escorted them back to Nazareth. All that took courage, because there were lions, leopards and bandits about in those days – as well as Herod’s henchmen.

Michael Casey, in his book Balaam’s Donkey, says that people typically get their image of God the Father from their childhood experiences of their own father. Casey suggests that Jesus must have drawn from his own everyday experiences of Joseph to describe his understanding of his divine Father. [iii]

In other words, there’s a great similarity between the loving hearts of Joseph and God the Father.

In his book, Behold the Man, Harold Burke-Sivers compares Joseph with Adam, the first man. Although both are silent, he says, the implications of their silence will have lasting effects on humanity.

In the Garden of Eden, Adam stood by and did nothing while Satan lured Eve away from God the Father, destroying her heart and unleashing sin into this world. Adam was a failure as a ‘husband’, and mankind has lived with the effects of Original Sin ever since.

Joseph, however, was different. He trusted God, and he valiantly served, protected and defended Mary and Jesus in his role as head of the Holy Family.[iv] He is the epitome of fatherhood, and the very model of the ideal husband.

150 years ago, in 1870, Pope Pius IX declared St Joseph the patron saint of the Universal Church. To mark this anniversary, Pope Francis has recently proclaimed 2021 the Year of St Joseph.

In Hebrew, the name ‘Joseph’ means ‘he increases’. St Bernard of Clairvaux taught that Joseph was rightly named, because God ‘increased’ the gifts and graces in the world through St Joseph. [vi]

In the Year of St Joseph, may we, too, live like God’s earthly shadows.