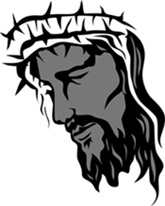 The Face of Christ

What does Jesus look like? The Gospels really don’t tell us. Perhaps the closest we get to a description of Jesus is in Matthew 26:48, when Judas kisses him so that the soldiers can find him in the crowd. This suggests that he looks like most other Jewish men in Palestine.

In his book The Face of Jesus, Edward Lucie-Smith says that 2nd Century theologians like Justin Martyr thought Jesus was physically quite ordinary. But later on, St Augustine and St Jerome described Jesus as beautiful in face and body. St Augustine said he was ‘beautiful as a child, beautiful on earth, beautiful in heaven’.

Today, most people think of Jesus as handsome, bearded and long-haired, an image strongly influenced by the Shroud of Turin. Over the years, however, Jesus has been portrayed in countless ways, and his image (especially his face) has been called the most important image in Western Art since 312AD. [i]

St Jerome once said, ‘The face is the mirror of the mind’. We say so much through our faces, even when we’re silent. Perhaps that’s why God says ‘Seek my face’ (Ps.27:8).

In today’s Gospel, Peter, James and John witness Jesus’ transfiguration atop Mt Tabor. For just a moment, Jesus’ clothes become dazzlingly white; his face shines like the sun, and they can see who he really is – both human and divine.

Since then, many people have sought to know Jesus by contemplating his face. When St Therese of Lisieux became a Carmelite nun in 1889, she adopted the name ‘Therese of the Child Jesus and the Holy Face’.

Jesus’ image was everything to Therese. It inspired her to look for his hidden face everywhere, and she wrote many prayers expressing her love for him. In her Canticle to the Holy Face (1895) she wrote, ‘Jesus, your… image is the star which guides my steps… Your sweet face is for me heaven on earth’.

She also wrote, ‘Make me resemble you, Jesus!’ on a small card and put a stamp of the Holy Face on it. She kept it in a little box pinned near her heart.

Her sister Celine said, ‘Just as the picture of a loved one serves to bring the whole person before us, so in the Holy Face of Christ Therese beheld the entire humanity of Jesus… Her devotion was the burning inspiration of (her) life.’ [ii]

Today, most people really aren’t much interested in Jesus’ Holy Face. The only face they really care about is their own; and some people don’t even like the one they’ve been given. They’d rather spend a fortune changing it.

As Shakespeare said in Hamlet, ‘God has given you one face, and you make yourself another’. [iii]

Indeed, Thomas Merton once wrote that our lives are shaped by what we live for. We become what we desire. [iv] And what did Merton desire? He answers that question in his book, The Sign of Jonas. He said: ‘I have one desire, the desire for solitude, to be lost in the secret of God’s face.’

This must be our desire, too, if we really want to be ourselves, because we’re all made in the image and likeness of God (Gen.1:27). And if you think about it, contemplating the face of Christ is actually contemplating our own identity and destiny.

In Mere Christianity, CS Lewis says that the only way to find our real selves, and to be our real selves, is in Jesus. He says we cannot fully be ourselves without Jesus because that’s where we come from.

And he adds that we’re all meant to be different, reflecting different facets of Jesus himself.

But the more I resist Jesus, he says, the more I become dominated by my own natural urges and the influences of the world around me, and we all end up the same.

He asks, ‘Have you ever noticed how monotonously alike all the great tyrants and conquerors have been, and how gloriously different all the saints are?’

When you focus only on yourself, in the end you’ll only find hatred, loneliness, despair, ruin and decay.

But if you focus on Christ, you’ll find him and everything else your heart is looking for. [v]

In other words, when you lovingly search the face of Christ, what you eventually find is yourself.