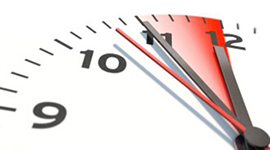 In all three synoptic Gospels, Jesus warns us that the world will end one day.

‘There will be great signs from heaven,’ he says. There will be fearful sights including wars and revolutions, earthquakes, plagues and famines.

If all these things are happening right now, might we be living in the end times?

People have been asking this question for the last 2,000 years, and many have tried to predict the world’s end. Indeed, one mathematician claims to have calculated that the world only has 760 years left. [i]

So far, these people have all been proved wrong, but in any case Jesus tells us not to listen to them because they are either ignorant or false teachers. For even he doesn’t know when the world will end; only his Father knows (Mt.24:36).

In today’s first reading, the prophet Malachi confirms that one day the world will end and all the ‘arrogant and the evil-doers of the world will be burnt up like stubble.’ What he means is that there’s no joy ahead for those who choose the way of sin and darkness.

Those who choose the way of light, however, can expect ‘the sun of righteousness to shine with its healing rays.’

In other words, if your faith is genuine, you need not fear because the Lord will come to ‘rule the world with justice and the people with fairness’ (Ps.97:9).

In our second reading, St Paul says that it’s wrong to sit idly by, watching and waiting for all this to happen. Instead, we should be setting a good example for others by living honest and humble lives, and working steadily to earn the bread we eat. Our work might not be easy, but it is a necessary and noble part of life, and an important pathway to heaven.

And in Luke’s Gospel today, after talking about the end of the world, Jesus warns that we Christians can expect to be persecuted for following him.

Now, the Church has always endured some form of persecution, but it’s much worse today. More Christians were martyred in the Twentieth Century than in all the previous 1900 years combined, and sadly, the numbers keep rising. [ii]

In many parts of the world, churches are regularly damaged and destroyed, and priests, religious and students are kidnapped and murdered. Laws have also been introduced to suppress Christian values and beliefs, and some professions, like doctors and nurses, are being forced to do things that contradict their faith.

Subtly and not-so-subtly, we’re all being encouraged to reject Jesus.

The Japanese writer Shusaku Endo was raised by a devout Christian mother and baptised at the age of eleven. He grew up a Christian in pre-war Japan, where Christians were less than 1% of the population. He felt an acute sense of alienation as his classmates bullied him because of his ‘western’ religion.

After the war, he went to France, hoping to find spiritual soulmates. But once again he faced persecution, this time because of his race. He became the target of racial abuse.

Rejected at home and abroad, Endo suffered a deep crisis of faith. He decided to visit Palestine to study the life of Jesus. There he made a profound discovery: that Jesus was also rejected. There was no room for him in the inn when he was born. His neighbours ran him out of town. His family questioned his sanity. One of his closest friends betrayed him, while the others abandoned him. And his countrymen traded his life for that of a terrorist.

All this came as a surprise to Endo. He had thought that Christianity was a triumphant faith, but he discovered instead that Jesus was the Suffering Servant. Endo could see in the weak, the broken and the rejected, the Jesus who was also rejected by his own, and tortured and condemned to death.

He learnt that Jesus could understand the rejection that he himself had experienced, and knowing that gave him great strength. [iii]

It’s not easy being a faithful Christian these days, and that’s precisely why Jesus wants us to know that the world will not last forever.

He’s not trying to make us fearful, because fear is the enemy of love, and God is the source of all love. Rather, Jesus is promising us that something much better is coming for those who follow him. ‘Your endurance will win you your lives,’ he says.

The point is that God is ultimately in control, and it’s foolish to ever think we can ‘go it alone’.

Knowing that our troubled world won’t last forever actually gives us hope. It gives focus to our labours, and it encourages us to prepare for the life to come.