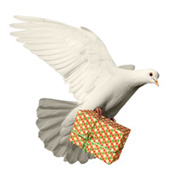 In today’s Gospel, Luke addresses his words to someone named Theophilus. In Greek, Theophilus means ‘one who loves God’. But we’re all people who love God, so Luke is also addressing his Gospel to us.

Luke says that he has worked hard to double-check everything he’s heard about Jesus, so we can be sure that his Gospel is accurate.

Then he tells us about Jesus’ first public appearance after his baptism. Jesus is back home in Nazareth ‘with the power of the Spirit in him’. It’s the Sabbath, and he’s in the synagogue when someone hands him a scroll of the prophet Isaiah. Jesus selects a passage about the coming of the Messiah, and as he reads it, it’s clear that he’s reading about himself.

Using Isaiah’s words, Jesus spells out the mission he’s about to begin. He says that his Father has sent him to bring good news to the poor; to proclaim liberty to captives; to help the blind to see; and to free the oppressed.

Now, some people think that all God has to do from here is to wave his magic wand and give us all the miracles we need. But that’s generally not how he works. Most of the time, God works through ordinary men and women, just like us.

When we open ourselves up to God, his Holy Spirit starts working in us, gently guiding our hearts, minds and wills, and influencing our thoughts and actions. God uses us to help other people, often when we’re unaware.

Some years ago, a priest working as a hospital chaplain made a mistake and entered the wrong room. An old woman was lying on the bed, and he started talking to her. But she didn’t respond; she just glared at him. Eventually, he realised his mistake, apologised and left.

A little later, he received a note asking him to return. That lady couldn’t speak, so he asked her many questions until he came to the one she responded to: ‘Do you want to be baptised?’

He baptised her right away, and promised to return. But a few hours later, he received another note saying that she’d died.

That chaplain had not entered the wrong room. The Holy Spirit had sent him there to answer that lady’s prayer. [i]

Here’s another story. Jim Caviezel, who portrayed Jesus in Mel Gibson’s movie The Passion of the Christ (2004), was very nervous at the start of his acting career.

In 1997, he drove up to the house of Terrance Malick, the film director, to talk about an acting role. He was terrified. Before going inside, he sat in his car and prayed the Rosary, asking God for courage.

As he walked to the front door, he noticed that he was still holding his Rosary beads. He considered returning them to his car, but something told him to keep them.

A little maid answered the doorbell, and on her neck was a miraculous medal.

Without thinking, he held out his Rosary and said, ‘This is for you, ma’am.’ She was startled and said, ‘Why did you do that?’ She started to cry.

‘My God!’ she said, ‘the woman who gave me this medal – the miraculous medal of the Virgin Mary – also gave me a rosary she got from Mother Teresa. But I lost it, and I prayed that God would send me another. Then you walk in.’

As she cried, and Caviezel felt shell-shocked, the director appeared. ‘Honey, what’s wrong?’ he asked. This was no maid, Caviezel realised. It was Malick’s wife.

The Holy Spirit had answered their prayers: Mrs Malick received a new Rosary and Caviezel got his first major acting role, in the movie The Thin Red Line. [ii]

It’s through us, as the members of the Body of Christ, that God answers prayers today, offering hope, healing and liberation to all who need it (Jn.14:12).

What is the Holy Spirit asking of you today?