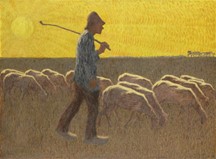 To Be a Good Shepherd

Sheep have been grazing in the Holy Land for a very long time. Historians tell us that sheep were first domesticated in the Middle East some 8,000 years ago, so it’s not surprising that the Bible mentions sheep over 500 times. [i]

Abel was the very first shepherd (Gen.4:3-4), and many other great biblical figures were shepherds, too, including Abraham, Jacob, Moses, Amos and King David. Even God is often referred to as ‘the Shepherd’ who cares for his flock (Gen.49:24; Is.40:11; Ps.23).

Today, on Good Shepherd Sunday, Jesus tells us that he’s the Good Shepherd who does three things for his sheep: he knows them well, he protects them from harm, and he leads them to everlasting life.[ii]

Many people love the thought of Jesus, the Good Shepherd, leading his people to greener pastures. But that’s as far as it goes. They don’t actually follow him, and they don’t consider that they’re meant to be good shepherds, too. After all, that’s partly what Jesus means when he tells Peter to ‘Feed my lambs, tend my sheep’ (Jn.21:15).

He’s telling us all to be good shepherds to each other.

In his novel Lazarus, Morris West tells the story of Leo XIV, a fictional pope who’s presented as a cold and distant character. One day, he’s recovering in hospital after heart bypass surgery, when a nurse challenges him: ‘You are the supreme shepherd,’ she says, ‘but you don’t see the sheep, only a vast carpet of woolly backs stretching to the horizon’. [iii]

Are we like that? Do we even notice the sheep around us? The truth is that many people today are vulnerable, and need ongoing support, guidance and protection, just like sheep. They need a shepherd.

Sheep farmers say that if you simply leave sheep grazing in a paddock and ignore their other needs, they’ll gradually become weak and sick. But when a shepherd really cares for each animal, the whole flock will prosper.

It’s the same with people: when they’re ignored, they suffer. Jesus knew this; he had real compassion for crowds that ‘looked like sheep without a shepherd’. That’s why he taught them and told his disciples to feed them (Mk.6:30-44).

What, then, are the marks of a good shepherd?

Firstly, good shepherds are kind and humble (Phil.2:7). Their first priority is their sheep. They make sure that they’re always safe, well-nourished and well-cared for (Mt.20:28).

Secondly, good shepherds are good listeners (Jas.1:19). They always listen patiently for the cry of their sheep and respond when they need help.

Thirdly, good shepherds are trusted. Their sheep know them, and their shepherd knows them by name. The flock will always follow their shepherd because they know his voice and trust his actions (Jn.20:4).

And finally, good shepherds do all this for love, not money. As Jesus tells us, a hired hand will run when the wolf appears, because he’s not committed to his job. But good shepherds are prepared to sacrifice everything for their sheep  (Jn.10:12-13).

Oscar Romero (1917-80) was born in El Salvador, in Central America, into a family of ten children. His father wanted him to be a carpenter, but he became a priest and for many years he quietly served his parish community.

In 1977, while the Salvadoran government was brutally repressing its people, Oscar Romero became the archbishop. Weeks later, a close friend was assassinated, and this normally quiet man changed. He decided to take a stand.

Through his regular radio broadcasts and from the pulpit, Oscar publicly criticised the government, he defended the rights of the poor and he demanded political change. He also urged the army to stop killing people.

But he was accused of meddling in politics, and in 1980 he was shot dead while celebrating Mass.

Pope Francis canonised him in 2018.

Like Jesus Christ, St Oscar Romero was not a hired hand; he didn’t labour for money. He was driven by love.

He didn’t just think or talk about the people’s suffering. Rather, he listened to them and took action. He became a good shepherd, just like Martin Luther King and so many other good men and women who have risked everything to help others.[iv]

But today is also the World Day of Prayer for Vocations, which reminds us that we’re all meant to be good shepherds, looking out for each other.

So many people around us need our love and protection.

[ii] This parable of the Good Shepherd is the only parable in John’s Gospel.