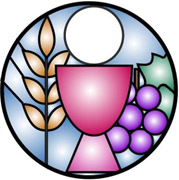 On the Real Presence

Today, on Corpus Christi Sunday, we celebrate the Body and Blood of Jesus Christ.  Pope Urban IV established this feast in 1264, shortly after a Eucharistic miracle occurred at Bolsena in Italy.

In 1263, a pilgrim priest travelling from Prague to Rome stopped at Bolsena to say Mass.  He’d been having doubts about his calling and had asked God to strengthen his faith.  During the consecration, when he raised the host up high, it started to bleed onto the altar cloth.  Today that blood-stained cloth is kept in the Cathedral in Orvieto.  I saw it in 2008.

In today’s Gospel, Jesus says ‘My flesh is real food and my blood is real drink. He who eats my flesh and drinks my blood lives in me and I live in him’ (Jn.6:55-56).  He’s not speaking figuratively. He’s not speaking metaphorically. He’s speaking literally.

The Jews couldn’t understand it (Jn.6:60), and many people today can’t understand it either.  For how can the bread and wine at Communion possibly be the body and blood of Christ?  It doesn’t look any different.

Well, to teach us what really happens and to encourage our faith, every now and then God sends us a Eucharistic miracle.  Over the years there have been dozens of them, across 22 countries. [i]

In their book ‘Unseen’ (2013), Ron Tesoriero and Lee Han explain three of these miracles. [ii]  The first was in 1996, in Buenos Aires, when Pope Francis was a bishop.  A priest found a host in a candle-stand.  He put the host in a bowl of water to dissolve it, and then he placed it in the tabernacle.  Eight days later the host had turned red, with something like blood oozing from it.

Pope Francis asked for photos and in 2004 a sample was sent to New York for forensic examination.  Several scientists investigated it, without knowing where it came from.

The second Eucharistic miracle was in 2008, in Sokolka, Poland.  A consecrated host was accidentally dropped at Mass.  It was also placed in water and locked in a safe.

Days later, a nun found that the host had developed a red mark on it.  It was sent for analysis, and again they found human heart tissue. The damaged myocardial fibres indicated that that heart had suffered agony in the form of painful spasms, and again the tissue was from a live heart.

The third miracle was in Lanciano, Italy, in 750 AD.  As the priest consecrated the bread and wine at Mass, they literally turned into flesh and blood. That flesh and blood are still there today in a reliquary in the Church of St. Legontian.

In 1971, these relics were examined by scientists at the Arezzo Hospital and the University of Siena.  These specimens, over 1200 years old, were still fresh.  The investigators found heart tissue, as well as the rare blood type AB.

Interestingly, the NASA scientists who tested the Shroud of Turin in 1978 also found blood type AB.

When Jesus says, ‘This is my body, this is my blood’, he’s not kidding.  He’s literally giving us his Sacred Heart.  He’s giving us himself.

St Thomas Aquinas taught that when we approach the Eucharist, four of our five senses fail us.  He said that what we receive at Communion looks, smells, feels and tastes like ordinary unleavened bread.  But clearly it’s not.

At that moment, he said, we can only trust one of our senses: our hearing.  That’s when we believe Jesus when he says, ‘this is my body, this is my blood’.

In John chapter 6, Jesus tells us thirteen times that we must eat his flesh and drink his blood.  He also says ‘whoever eats me will draw life from me (and) … anyone who eats this bread will live forever’ (Jn.6:57-58).

Now, as Christians we don’t have to believe in miracles – not even when they’re officially recognised.  We’re free to make up our own minds.  But Jesus does want us to have faith.  That’s why he encourages us with these signs.

Jesus is truly present in the Eucharist.  He’s right here, right now, offering us his love, his healing and his Real Presence.

Jesus is always here for us when we come to Mass.