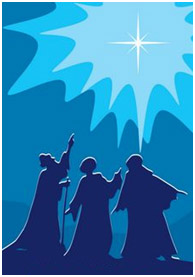 On Our Guiding Star

Today we celebrate the Feast of the Epiphany of Our Lord, and the end of the 12 days of Christmas.

In Greek, ‘epiphaneia’ means ‘appearance’ or ‘revelation’, so on the Epiphany we remember the moment when the Wise Men of the East discovered the infant Jesus in Bethlehem.

Now, some people wonder why the Three Wise Men followed a star.  Today it seems like a strange thing to do, but in ancient times people were fascinated by the sky.  Indeed, the Magi are believed to have been priestly scholars and astronomers who interpreted the dreams of nobles and kings and who studied the movement of the stars.

In those days, changes in the celestial sky were thought to be a sign of major events, such as the birth or death of a king, and the appearance of a bright new star would have been exciting.  And the Magi would have learnt about the Hebrew Bible from the Jews exiled in Babylon.  They’d have known about Balaam’s messianic prophecy that ‘a star shall come forth from Jacob’ (Num.24:17).

Today, travellers use all sorts of sophisticated technology like GPS to work out where they are and where they’re going.  But in ancient times, people navigated differently.  The Vikings used to interpret the behaviour of birds.  Eskimos studied the snow.  Polynesians watched the waves and the Greeks read the clouds and smelt the air.

And many cultures, including the Phoenicians, Babylonians and Australian Aborigines used to carefully study the movement of the sun and the stars to work out where they were going. [i]  The Polynesians did, too.  You can see this in Disney’s movie Moana.  Polynesian sailors found their direction by memorising where the stars rose and set, and by using their hands to make calculations. [ii]

Epiphany is a moment when a light shines in the darkness and everything becomes clear.

When the Wise Men of the East followed the Star of Bethlehem, they travelled about 1,000 kilometres and they eventually found Jesus, the ‘bright morning star’ (Rev.22:16).  They took a risk.  They stepped outside their everyday lives, and were rewarded by discovering the source of all wisdom and joy.

Now, which star will you be following this year?

Many people today spend lots of time following movie stars, pop stars and sports stars, while others chase the stars of fame and fortune.  The problem, however, is that these things are hollow. They might look nice, like rainbows, but they have little or no substance and ultimately they only lead to disappointment.

This year, why not do something far more meaningful?

In 2012, Pope Benedict XVI described the Epiphany as a ‘feast of light’, because it reveals Christ as the Light of the World.  Indeed, all our readings today reveal how Jesus shines a bright light into the darkness.

In our first reading, Isaiah has a vision of Jerusalem as a holy city where God’s light will shine, bringing peace and love and hope to all.

In our second reading, St Paul tells the Ephesians that God’s peace and love and hope are available to everyone, regardless of who they are and where they come from.  And in today’s Gospel, Matthew reinforces this message.

The Magi weren’t Jewish; they were complete strangers, yet they still followed the signs to Jesus.  Like the shepherds, they show us that Jesus belongs to everyone, and not just a select few.

In 2014, Pope Francis said that the journey of the Magi symbolises the destiny of every person.  He said that our life is a journey, illuminated by the lights which brighten our way, to find the fullness of truth and love which we recognize in Jesus, the Light of the World.

The novelist Joseph Conrad once described epiphany as ‘one of those rare moments of awakening’ in which ‘everything [occurs] in a flash’.  It’s a moment when a light shines in the darkness, when everything becomes clear and we discover something new.

This year, let’s resolve to follow Jesus …  to really get to know him …  and to let his light shine in our hearts.