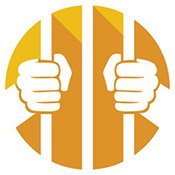 2023 marks the 10th anniversary of the death of Nelson Mandela, the great reformer who led a peaceful revolution in South Africa. He was 95.

He got his name ‘Nelson’ from a school teacher, because his original name, Rolihlahla, means ‘troublemaker’. That name would have been appropriate, however, for he was born to be a revolutionary. He hated apartheid and joined the opposition African National Congress in 1944. That’s when he began organising protests and other forms of civil disobedience.

Mandela at that time believed that the only way to win freedom was through violence, and in 1961 he established the ANC’s military wing. He read widely about other revolutionary figures and planned to start a war. But he was quickly arrested and gaoled for 27 years on Robben Island, near Capetown – a bitterly cold place in winter.

In today’s Gospel, John the Baptist is also languishing in prison, but this one’s baking hot. He’s in Herod’s desert fortress at Machaerus, 15km east of the Dead Sea. Like Mandela, John is also a revolutionary and he’s fearless about criticising the Roman and Jewish leaders of his day. He’s angry about the Roman oppression of his country, Judea, and he detests the hypocrisy of the Jewish leaders. He’s convinced that God is coming to establish his kingdom on earth, and he tells everyone to get ready.

Like most Jews, John expected the Messiah to be a great warrior, leading an army to rescue God’s people. But now, chained to a prison wall, he’s not so sure. From what he has heard, Jesus hasn’t behaved like a warrior at all, and he wonders if Jesus will come to save him.

So, he sends two of his followers to ask Jesus if he really is the Messiah or whether they should expect someone else.

There are some close parallels between Nelson Mandela and John the Baptist. Both were natural leaders. Both were prophets, filled with fire and conviction, and both gave hope to millions of people.

Mandela helped to bring freedom to an oppressed people, and John the Baptist prepared the way for an even greater kind of freedom, through Jesus Christ.

When Jesus answers John’s question about whether he’s the Messiah, he doesn’t even mention armies or vengeance. Instead, he tells John’s messengers to ‘Go back to him and tell him what they hear and see: the blind see again, the lame walk, lepers are cleansed, the deaf hear, the dead are raised to life, and the good news is proclaimed to the poor’.

His message is that only the love of God can give people the life they seek.

Now, Jesus fears that John might not like his reply, so he adds, ‘Happy are those who do not lose faith in me’.

We don’t know how John responded, but we do know that Nelson Mandela didn’t lose faith. While in gaol, he did what so many of us need to do – he opened himself up to God and he allowed himself to be changed from within.

Indeed, over many years a Catholic bishop became his pastor and close friend.

Like John the Baptist, Mandela came to understand that the only way to lasting peace is through love, forgiveness and reconciliation; not through violence and war.

In a world that so often glorifies violence, this was revolutionary.

And so is living as a genuine Christian. Like Nelson Mandela and John the Baptist, following Jesus today means turning away from the anger, hostility and intolerance of our world. It means rejecting the shallow and selfish obsessions of our society.

And it means recognising that the only way to the peace and joy our hearts yearn for is through the love of God and our neighbour, just as Jesus teaches us.

For many of us this is quite a challenge, because it can be hard to break free from our worldly ways.

Dietrich Bonhoeffer, the German pastor who was gaoled and murdered by the Nazis, once said that Advent is like a prison cell ‘in which one waits and hopes, and … is completely dependent on the fact that the door of freedom has to be opened from the outside.’

Many of us recognise this. We know we need help, and that’s why Advent is such a great gift to us.

Advent is the season of new beginnings. It’s the ideal time for us to invite God into our lives, asking him to release us from whatever imprisons us, and to help us live a life of peace and love.