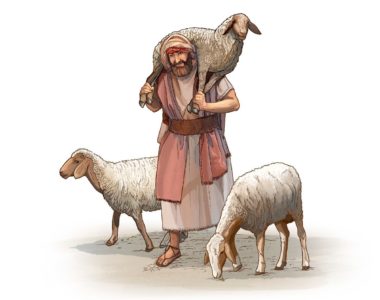 In his novella The Good Shepherd, Gunnar Gunnarsson tells the story of Benedikt, a simple man who risks his life to round up other people’s lost sheep in the highlands of Iceland. [i]

He does this every year, in the dead of winter, accompanied by his faithful dog Leo and his companion sheep, Gnarly.  Like a Holy Trinity, they venture out into the Icelandic wilderness, searching for sheep before it’s too late.  ‘They shouldn’t die of exposure or starve to death up in the mountains,’ he says, ‘solely because nobody could be bothered, or dared, to search them out and bring them to safety.’  Benedikt is a saintly man on a holy mission.

Throughout history, many saints began life as shepherds.  Great biblical figures like Abraham, Abel, Moses and David were all shepherds.  So were St Patrick of Ireland, St Peter Chanel, St Bernadette of Lourdes, and Sts Francisco and Jacinta Marto of Fatima, among many others. [ii]

What is it, then, about shepherding that prepares a person for sainthood?  Is it the earthy humility?  Is it the time it allows for solitude and prayerful contemplation?  Or does the experience of guiding, protecting, nourishing and healing an ovine flock help form a person for pastoral service?

The pre-eminent shepherd, however, the one who sets the standard for us all to follow, is Jesus Christ himself.  In one of his seven ‘I am’ statements in John’s Gospel, Jesus clearly tells us, ‘I am the good shepherd’ (Jn.10:11).

Why does he call himself that?  It’s because he risks his life for his sheep.

Jesus says there’s a big difference between a shepherd and a hired hand (Jn.10:12-13).  A hired hand doesn’t own his flock; he has other priorities.  When the wolf comes, he runs away leaving the flock untended and vulnerable.

The Good Shepherd, however, has no greater priority.  His flock is his life. He loves his sheep and he’ll never leave them for fear or temptation.  That’s why Jesus lays down his life on the Cross.  He simply cannot abandon his people.

The mark of a good shepherd is that he will always tend to the whole flock, while caring for each sheep.  The more compassion he has for each individual, the healthier and happier the flock will be.

But Jesus warns that there are thieves and brigands about who masquerade as shepherds, killing, stealing and enriching themselves at the expense of others (cf. Ezek.34).

That’s why, as St Peter says in our second reading today, Jesus left an example for us all to follow.  He wants us all to serve as good shepherds over the people and things entrusted to us.  Whether at home, at school, at work or elsewhere, we’re all called to reflect the love of Christ by guiding, protecting, nourishing and healing those for whom we have responsibility.

Many good shepherds have followed Jesus’ example in recent times.  Sister Dorothy Stang, the ‘Angel of the Amazon’, spent years working with the indigenous tribes of Brazil, teaching them how to confront illegal loggers, ranchers and local authorities who threatened their rainforest and their families.  She was murdered in 2005, at the age of 73. [iii]

The Filipino journalist and veterinarian Gerardo Ortega worked hard to protect ancient tribal lands on the island of Palawan.  Through his radio program, he criticised the destructive practices of the mining companies.  In 2011, just before launching his Ten Million Signature campaign, he was assassinated. [iv]

And in 1977, the quietly-spoken pastor Oscar Romero was installed as Archbishop in El Salvador.  After witnessing the assassination of a close friend, he began challenging the brutality of the country’s regime. He fought for the rights of his people and he loudly condemned the government’s policies.  In 1980, he was shot while celebrating Mass.  Enormous crowds attended his funeral.

Like Jesus Christ, these saintly people were not hired hands seeking personal gain.  They were driven by love to serve as good shepherds of their people.

Genuine love, freely and unconditionally given, invariably involves some form of sacrifice.  The deeper the love, the greater the sacrifice. That’s why Jesus says there’s no greater love than to lay down one’s life for one’s friends (Jn.15:13).

So, we are all called to be good shepherds: kind, forgiving, compassionate and merciful, just like Jesus.

And today, on this World Day of Prayer for Vocations, we remember that many people still need the love and protection of a good shepherd.

Jesus has set the example.  Now it’s our turn.