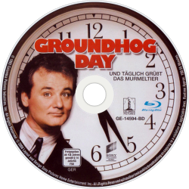 Today, February 2nd, is the Feast of the Presentation of Our Lord in the Temple.  Many years ago, it was known as Candlemas and it was the Church’s day for the blessing of candles.

In the United States and Canada, today is also called Groundhog Day.  This is a folkloric tradition that grew out of Candlemas, which itself marks the mid-point between the northern winter and spring.  On Groundhog Day, a groundhog’s shadow is used to predict the weather, but I’ll come back to that shortly. [i]

In today’s Gospel, Mary and Joseph go to the Temple in Jerusalem.  The Law of Moses required every mother to undergo ritual purification and to present her child for consecration to God, 40 days after giving birth (Ex.13:1-2; Lev.12).

As the Holy Family enter the Temple, they find Simeon and Anna waiting for them inside.  The Holy Spirit long before had promised Simeon that he would not die before he’d seen the Christ, the Messiah. So, for years he and the prophetess Anna waited patiently.  When baby Jesus finally does arrive, Simeon is overjoyed.  He holds Jesus in his arms and he prays his famous prayer Nunc Dimittis: ‘Now, Master, you can let your servant go in peace, just as you promised…’

This story reveals so much about the character of these saints.  Simeon, Anna and the Holy Family are all Spirit-filled and very devout in the practice of their faith. They’re also humble, obedient and patient, and they trust God completely.  Life may be hard, but they’re happy.

Now, let’s compare them to Phil Connors, the actor Bill Murray’s character in the movie Groundhog Day (1993). He’s a cranky TV weatherman who goes to Punxsutawney, Pennsylvania, to report on the annual Groundhog Day festival.

We soon learn that he’s an obnoxious and self-centred narcissist.  ‘People are morons’, he tells his producer Rita. He can’t wait to return home, but a snowstorm forces him and his film crew to stay.

The next morning, Phil’s alarm clock wakes him up and he’s appalled to discover that it’s Groundhog Day all over again.  He’s caught in a strange time-loop, and he has to relive this day over and over and over again.

Every day, every little action is repeated, from meeting an old school friend in the same place at the same time, to stepping into an icy pothole.  His life becomes incredibly monotonous, but he’s the only one who notices.

At first he’s amused, but then he becomes bored and then he despairs. He hates his repetitive life so much that he even tries to commit suicide.  But he’s always back the next day.

It becomes clear that what’s important in this story isn’t the groundhog’s shadow, but his own.  At one point in the film, one of the townsfolk says to Phil, ‘Watch out for your shadow there, pal!’  It’s his shadow side that’s condemning him to this endless cycle of emptiness.  It’s his sinfulness and bad behaviour that are holding him back and making him unhappy.  He’s trapped in darkness.

It’s only when Phil opens his heart that things begin to change.  He starts noticing Rita, his producer.  He’s attracted to her and her happy outlook, and he finds himself inspired by her to do good things. He makes friends, he rescues a homeless man and he even starts learning music and poetry.

It’s only when Phil genuinely discovers love that time starts to move forward for him.  That’s when he wakes up to find that it’s February 3rd and he’s been given new life.

The movie Groundhog Day is a parable about life.  It’s full of lessons about the state of our hearts and whether we choose to live in the light or in the shadows.

The elderly Simeon and Anna in Luke’s Gospel also lived predictable and monotonous lives.  For years they went to the Temple every day, waiting for Jesus to arrive.  But what made them quite different to Phil was their deep faith.  The Holy Spirit had filled their hearts with hope, and when Jesus arrives they’re overwhelmed with joy.

Just like Jesus, we’ve all had our own official Presentation.  This happened at our Baptism, when we were presented and consecrated to God and given a candle lit from the Paschal candle.  At that moment, the priest or deacon said, ‘You have been enlightened by Christ. Walk always as a child of the light and keep the flame of faith alive in your heart…’

This light, this flame of faith and love, is the difference between a dreary repetitive existence and a life of meaning, purpose and joy.

So, the question for you today is this:

[i] By way of background, midseason weather predictions were important to European farmers. An old English song rhymed: ‘If Candlemas be fair and bright, / Come, Winter, have another flight. / If Candlemas brings clouds and rain, / Go, Winter, and come not again’.  In other words, if the bright sun ‘overshadows’ the brightness of Candlemas Day, more winter is expected. But if the light of Candlemas Day outshines the season’s gloom and darkness, then spring is near. In 1887, German immigrants adapted this tradition in the US to create Groundhog Day. Not surprisingly, the weather predictions are notoriously unreliable.