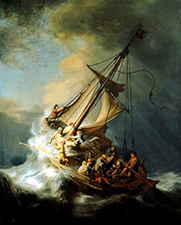 ‘The bad time comes,’ wrote Doris Lessing, ‘and we don’t know why.’

On the Sea of Galilee, the bad time comes when the cool air from the mountains rushes down towards the warm sea air, creating violent storms.

In Mark’s Gospel today, Jesus is tired at the end of another long day of teaching, and he says to his disciples, ‘Let’s go to the other side of the lake’. The sea is calm as they board their boats, but soon they’re battling a tremendous storm.

In 1633, Rembrandt painted a picture of this scene. It’s his only seascape, and it’s called Storm on the Sea of Galilee. It shows Jesus and his twelve disciples in one boat, as a large wave smashes into their bow, tearing a sail. [i]

If you look carefully, you’ll see that there are actually fourteen people on board. Rembrandt has included himself: he’s the man holding his cap and facing us, the viewers.

‘Lectio Divina’ is the prayerful process whereby a person places himself inside a biblical narrative in order to reflect on what God might be saying to him. [ii] Here, Rembrandt is inviting us to do the same. He’s inviting us to insert ourselves into this scene, and to reflect on the storms we experience in our own lives.

Now, look at the rear of the boat: there’s a light shining on the figure of Jesus, and on those focussed on him. The message here is that even in the midst of a storm, the light of Christ will help you to stay calm. But you must keep your eyes fixed on Jesus.

In contrast, look at the disciples hidden in the shadows. They are only aware of their own anxiety and fear, and one is even vomiting overboard. Might they represent us in our own turbulent lives?

There’s also a third group of disciples. They are the figures nearest the mast, who are struggling to keep the boat afloat. In the midst of them is Peter, with his back turned to the light of the sky. That light indicates that the storm is about to break.

In this pose, Peter represents us when all we can see is darkness and misery, instead of the wonderful light that God is constantly shining on us.

So, here’s the question: are you battling a storm in your own life? Perhaps you’re struggling with some physical, emotional or financial distress. Which character, then, might you identify with in this painting?

William Barclay says that Jesus’ calming of the sea is a great miracle, but we should be looking at it symbolically, to see what we can learn from it.

To voyage with Jesus, he says, is to voyage in peace, even in a storm. Why? It’s because once the disciples understood that Jesus really was with them, they started to feel calm and the storm subsided.

This isn’t something that only happened once, Barclay says. It’s something that’s still happening today, and it can happen for us, too, if we have faith. [iii]

Mark’s Gospel today reminds us that whatever storms we face, Jesus is always with us. It might seem like he’s asleep, but we can be sure that he’s firmly in control.

So, our faith must be strong.

Sure, our faith won’t guarantee smooth sailing – even Jesus had to weather storms. But having faith means understanding who God is and knowing that he truly loves us. It means accepting that God is always looking after us.

And it means that in the presence of Jesus, I can have peace deep in my heart, even in the middle of a storm.

A retired sea captain used to take day-trippers to the Shetland Islands, north of Scotland. On one trip the boat was full of young people. They laughed when they saw the old captain say a prayer before setting out, because the day was fine and the sea was calm.

However, they weren’t long out at sea when a storm suddenly blew up. The terrified passengers came to the captain and asked him to join them in prayer. But he replied, ‘I say my prayers when it’s calm. When it’s rough, I attend to my ship.’

Here’s the point: If we don’t seek God in the quiet moments of our lives, we’re not likely to find him when trouble strikes. We’re more likely to panic.

But if we’ve learnt to seek God and to trust him in our quiet moments, then we can be sure we’ll find him when the going gets rough. [iv]

[i] This painting was stolen from the Isabella Stewart Gardner Museum in Boston in 1990. It’s still missing. The Netflix documentary This is a Robbery tells the story of this theft.

[ii] Lectio Divina is the process of reflecting on the words of a biblical passage. Visio Divina uses a picture rather than words.