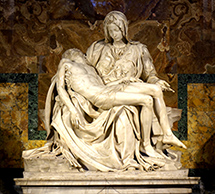 How do you respond to rejection? Do you get angry and upset?

In today’s gospel, Jesus returns home to Nazareth. It’s early in his public ministry, and he’s gained quite a reputation across Galilee for preaching and healing. But his hometown neighbours can’t accept it. They refuse to see him as anything but a lowly workman. So, Jesus quietly leaves town again.

In 1917, something similar happened to the three shepherd children of Fatima (Francisco, Jacinta and Lucia). The local mayor refused to believe that they’d met the Virgin Mary. He bullied them and demanded that they admit their lies.

And in 1858, in Lourdes, young Bernadette Soubirous was also threatened. The police and the local priest thought she was lying, too, because ‘Mary would never choose to visit a poor peasant girl like her’.

How did these children respond? They stood firm, and learnt to show holy indifference. Now, what does that mean?

St Vincent de Paul (1581-1660) explained holy indifference by describing the donkey. This animal, he said, is indifferent about carrying one thing or another. It doesn’t care whether it’s guided by a rich or a poor man, or whether it’s in a fine house or a wretched stable. For the donkey, it’s all the same.

So, holy indifference means accepting whatever comes our way without complaining. Why would we do that? It’s because we trust God, and we know that ultimately, our only purpose in life is to do his will. [i]

After meeting Our Lady in Fatima, young Francisco caught the deadly Spanish ‘Flu.  And Bernadette of Lourdes contracted tuberculosis. They both suffered greatly, but neither complained. They accepted their sickness as God’s will.

Have you seen Michelangelo’s Pietà? It’s in St. Peter’s Basilica in Rome. Michelangelo completed this sculpture in 1499, when he was only 24. It depicts the Blessed Virgin Mary cradling Jesus’ body, just moments after he was taken down from the Cross.

Now, as a grieving mother, you might expect Mary to be crying and holding Jesus’ body tightly. But look closely: this is a good example of holy indifference.

See Mary’s face. Is she filled with sorrow, grief and tears? No. She’s very much at peace.

Now see her hand on the left. Is she touching Jesus? No. There’s cloth between her hand and his body. She’s detached from his lifeless form.

And her other hand? It’s not touching his body, either. Mary’s hand is open and she’s gently presenting the Body of Christ to us as a gift, as a sacrifice for our salvation. This image is deeply Eucharistic.

Now look at Jesus’ body. It seems to be sliding off Mary’s lap. Why? It’s because she’s letting him go.

This sculpture is a beautiful representation of holy indifference. To some, it may seem outrageous, for how could a mother let her son go? But remember: there’s a bigger story going on here. Jesus’ death isn’t the end. It’s actually the beginning of new life – a better life – for Jesus, for Mary and for us all.

Mary is at peace because she knows that her own immediate needs aren’t as important as God’s bigger plan for all humanity.

She also knows that it’s not outrage or grief that heals our wounds. What truly heals us is our faith, our trust that God’s goodness will prevail over darkness. So Mary responds to suffering and sin not out of her anxiety and fear, but out of her absolutely serene trust in God. [ii]

Sure, it’s not easy to detach ourselves from all that happens around us, for we are involved and we do care. But with practice, and inspired by Mary and the saints, holy indifference helps us to rise above the pain. It helps us become more patient, relaxed and joyful, and ultimately it will lead us to sainthood.

St Ignatius of Loyola (1491-1556), in his Spiritual Exercises (#23), said that the goal of life is to live with God forever. God gave us life, and when we respond with love to all that happens to us, we allow his life to flow into us without limit.

St Ignatius also said that all things in this life are gifts from God, given to help us know and love him more easily. But these gifts must not become the centre of our lives. If they do, they’ll displace God and stop us reaching our goal. So, we must be prepared to let go.