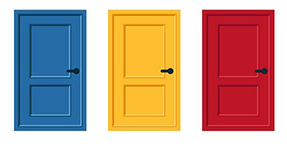 On Choice and Consequence

According to Newton’s third law, every action has an equal and opposite reaction.

Something similar happens when we make decisions, because every choice has its consequences.

That’s why we sometimes worry when young people make their own decisions. Neurologists tell us that the parts of the brain that control higher order decision-making don’t fully develop until adulthood. So, a young person’s developing brain places them at greater risk of making poor choices. They’re more likely to overestimate the rewards (fun! friends!) and under-consider the risks. [i]

But with time, education and experience, hopefully we all come to develop well and make sound decisions. The sweep of human history does make us wonder, however.

The Bible is full of stories about choices and their consequences. It even begins with Adam and Eve choosing to eat the forbidden fruit in the Garden of Eden. God lets them do this, but we’ve been suffering the consequences ever since.

There are other stories, too, as Max Lucado points out. Cain and Abel were the sons of Adam and Eve. Abel chose God, but Cain chose murder, and God let him.

Abraham and Lot were both pilgrims in Canaan. Abraham chose God, but Lot chose Sodom, and God let him.

David and Saul were both kings of Israel. David chose God, but Saul chose power, and God let him.

All through history, and all through Scripture, God lets us make our own decisions. He won’t stop us doing the wrong thing, but we need to remember: our choices can have eternal consequences. [ii]

In our first reading today, Joshua is the man who takes over from Moses after the Israelites enter the Promised Land. But now he’s old, and he tells the leaders of the twelve tribes of Israel that they must decide: either to follow the false gods of their new land, or to stay faithful to the God of their ancestors who gave them their new home.

Joshua declares that he will serve the true God, but the others must decide for themselves. And they do decide: they all agree to do the same.

Our Gospel reading for today comes from the end of John’s Bread of Life discourse. It represents a turning point in the life of the disciples, for Jesus gives them a choice: either to stay and accept the Eucharistic gift of eating his flesh and drinking his blood, or to leave with those who can’t understand him or who refuse to change.

‘Do you want to leave me, too?’ Jesus asks, and Peter replies, ‘Lord, where else would we go? You have the words of everlasting life.’

Many people have chosen to leave the Church, and often because of disappointment. But in his reflection on today’s Gospel, Patrick van der Vorst says, ‘It’s precisely in these moments that Christ is asking us to stick with him, to walk with him and his Church.

‘The temptation to flee our Christian duties is at times very real and even attractive. But it’s precisely in those moments when we’re asked to keep a deep commitment going, that we draw the closest to God.

‘To see so many people leaving our Church can be crushing at times,’ he says, ‘so today’s reading is relevant like never before.’

LS Lowry’s painting Going to Work (1943) depicts a multitude of people leaving. Reflecting on this image, van der Vorst asks, ‘Where are they going, what are they walking towards?’ [iv]

We might well ask ourselves that same question, because our choices do have consequences. Where are we going if we’re not walking with Christ towards heaven?

‘For Jesus, being a disciple is all about staying with him and being committed. It’s about discipleship, and not just being a passive follower.’

As William Barclay puts it: Once someone was talking to a great scholar about a younger man. He said, ‘So and so tells me that he was one of your students’.

The teacher answered devastatingly, ‘He may have attended my lectures, but he was not one of my students. You see, there’s a world of difference between attending lectures and being a student’. [v]

In the end, it’s our choices that matter. Not our wishes, not our words, not our promises.