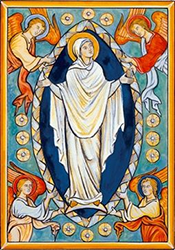 On the Science of Mary’s Assumption

Today we celebrate the Assumption of the Blessed Virgin Mary, body and soul, into heaven.

The Church has believed in Mary’s Assumption ever since the time of the first Apostles, but this teaching was only formally defined by Pope Pius XII in 1950.[1]

Mary’s Assumption isn’t the same as Jesus’ Ascension.  The word ‘assumption’ comes from the Latin ‘assumere’ (‘to take up’), for Mary was taken up into heaven by God’s power. Jesus, however, ascended to heaven under his own power.[2]

Where did Mary’s Assumption occur? It’s generally believed to have been either in Jerusalem or Ephesus, and some 3 to 15 years after Christ’s Ascension. Church tradition also tells us that the Apostles were present when Mary died.

Now, some people wonder about Mary’s Assumption because it’s not explicitly mentioned in the Bible. But Pope Pius XII says Scripture implicitly mentions it several times. In today’s second reading, for instance, St Paul describes Christ’s resurrection as the first fruits of those who have fallen asleep, and he says ‘in Christ shall all be brought to life, but each in proper order’.

Mary’s Assumption certainly is in proper order, given her role as queen mother and her victory in the battle between good and evil, as told in our first reading.

It’s also significant that no relics of Mary’s body have ever been reported, and no Marian tomb or gravesite has ever been venerated. This is notable, given the historical fascination of Christians for the relics of saints.

But what is interesting today is what science can tell us about the Assumption.

Elizabeth Scalia says that when she studied anatomy and physiology, she was amazed to learn about the biological process called Microchimerism.[3]

When a woman gets pregnant, the child always leaves within her a microscopic bit of himself in the form of cells. These living cells remain in her bloodstream and organs for the rest of her life, even if the foetus dies. This means that some of Jesus’ cells remained inside Mary all her life.

Recent research has found that these remnant cells aren’t dormant – they help to protect the health and well-being of the mother. They are found around healing wounds, helping with faster tissue repair. And they stimulate the formation of new blood vessels to injured and diseased structures in the body.

Microchimeric cells also improve im­mune system function, and they may lead to longer life for the mother. [iv]

Scalia points out that Psalm 16:10 says that God will not allow his Holy One to see decay, and we know that Jesus’ divine body did not decay because he ascended to heaven. So, it follows that Mary’s body, with cellular traces of Jesus inside her, could not be allowed to decay, either. After all, a particle of God is still God.

So, Mary was assumed into heaven, body and soul (Ps.132:8). She really is the Theotokos, the new Ark of the Covenant, containing our living God.

But what does this mean for us today?

When Pope Pius XII defined the doctrine of the Assumption in 1950, the world was still recovering from WWII. He hoped that the story of Mary’s Assumption would help us all better appreciate the value of human life, and most especially a life focussed on doing the will of God.

He hoped that we might all be inspired to live like Mary, whose only purpose was to bring God’s love into the world, through Jesus.

In 2006, Pope Benedict XVI said that Mary’s presence in heaven reminds us that the earth is not our final homeland. Heaven is our true home, and if we can stay focussed on the eternal, then one day we will share in the same glory as Mary and the earth will become more beautiful.

In today’s Gospel we are given Mary’s song, the Magnificat. It tells the story of Mary as the lowly handmaid who lovingly submitted to God’s command and agreed to bring Jesus into this world. In response to her fiat, Jesus became a permanent part of her and she was rewarded with eternal life in heaven.

Through the Holy Eucharist, Jesus becomes a part of us, too, though not a permanent one. That’s why we seek to receive him as often as we can.

And so this is our challenge: to become like Mary, the Blessed Mother – filled with Jesus, totally focussed on Jesus, and doing all we can to bring him into our world.