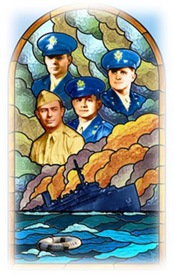 On the Four Chaplains

Some people are surprised to hear that my journey to the diaconate began with the Baptist Church. I have always been a Catholic, but when I worked for the Baptists many years ago, they helped me see my faith in fresh, new ways. I also did most of my diaconal formation while working for Wesley Mission. These good-hearted people were a great influence on me.

Many years ago, my Protestant connections would have been considered scandalous, but thankfully today the sectarian divisions of the past are fading. May they disappear altogether!

Interestingly, there are stories about division in our readings today. In our first reading, Joshua is outraged because two outsiders, Eldad and Medad, have been prophesying without Moses’ authorisation. ‘Stop them!’ Joshua says, but Moses refuses. He says he’d like to see many more people filled with the Holy Spirit and serving as prophets.

And in Mark’s gospel, John complains that someone who is not a disciple has been working as an exorcist, healing people.  But Jesus replies, ‘You must not stop them… Anyone who’s not against us is for us.’

Let me now share with you an inspirational story from the USAT Dorchester, an American cruise liner that was refitted as a US Army troopship during WWII.

Early in 1943, the Dorchester was travelling in convoy from New York to an army base in Greenland, carrying some 900 troops. On board were four army chaplains – a Jewish rabbi, a Catholic priest and two Protestant ministers.

For two weeks they did what chaplains do: they organised religious services, provided pastoral support and they encouraged the troops, many of whom were seasick. They also became friends.

On 3rd February 1943, as they crossed the North Atlantic, it was bitterly cold, with big seas and gale-force winds. Shortly after midnight, and only 150 miles from their destination, a German U-boat torpedoed them amidships, killing 100 men and destroying the ship’s electrical system. The lights went out and the ship started taking on icy water. The soldiers panicked and scrambled from their beds.

All four chaplains survived the blast and went on deck, tending the wounded, reassuring the frightened and handing out lifejackets. But there weren’t enough lifejackets and few of the lifeboats worked.

As the ship listed, some of the men fell into the freezing water, and the chaplains urged the men to jump the rails into the lifeboats. They leapt into the dark, terrified, hoping a lifeboat would catch them.

The four chaplains then stood on deck, linked arms, prayed and sang. The bow of the ship rose up, and she slid down into the water. Of the 902 men aboard the Dorchester, 672 died, including the four chaplains. But they had helped 230 men survive.

One of the survivors said that what they did was the finest thing he’d ever seen or hoped to see, this side of heaven.

On that ship, the religion of the four chaplains didn’t matter. They were all good men, full of compassion and trying to help others survive. In those days such behaviour was revolutionary. In fact, in 1988 the US Congress designated 3rd February each year as ‘Four Chaplains Day’. [i] [ii]

So, what can we learn from this story? Well, it demonstrates what it truly means to have faith. It teaches us that regardless of our faith traditions, we’re all essentially equal and only our attitudes separate us.

This story also reminds us that if our faith is genuine, then our first priority cannot be ourselves. As Jesus tells us, the two greatest commandments are that we love God and our neighbour (Mk.12:30-31).

Jesus also says that there’s no greater love than to lay down one’s life for one’s friends (Jn.15:13).

But what inspires people to love so selflessly? It’s the Holy Spirit, which is the power of God’s love. The Spirit is the wind that blows where it wills. Jesus says that you’ll hear the sound of it, but you won’t know where it comes from or where it goes (Jn.3:7-8).

The Holy Spirit is constantly working in our lives, in our hearts and in our world, trying to draw us all towards God and each other. The question is, however, whether our hearts are open to the divine Spirit. Do we welcome his gentle call, and are we responsive to his urgings?

When our hearts are filled with the love of God’s Holy Spirit, we too will find ourselves doing the most remarkable things.

Let’s close with this little prayer from Joyce Rupp’s book, May I Have This Dance?

Spirit of God, you are the stirrings in our hearts. You urge us to get going. You prompt us to follow. You encourage us not to give up. You call us to open our minds and our hearts to receive your energizing, transforming radiance. Make us receptive so that we will follow your loving movement within our lives. We trust in your powerful presence within us. Amen.