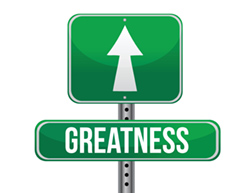 On the Road to Greatness

‘The world offers you comfort,’ Pope Benedict XVI once said, ‘But you weren’t born for comfort. You were born for greatness.’

What, then, is greatness? Most people today would probably use words like visionary, courageous and famous to describe it, but they’re unlikely to mention humility. Yet, so many of the world’s greatest leaders were humble. Just think of Jesus, Gandhi, Mother Teresa, Nelson Mandela and Martin Luther King Jr.

Humble leaders, research tells us, make better listeners and are more authentic than those who lack humility. And in his book Good to Great, Jim Collins says that humility is a common trait among the leaders of high performing companies.

But our popular culture doesn’t value humility; it equates it with weakness and low self-esteem. It much prefers things like power, position and prestige.

In today’s Gospel, Jesus is in Galilee, on the road to Jerusalem, teaching his disciples that he’s not interested in worldly success. Rather, he is destined to be betrayed and killed, but later he will rise again.

They don’t understand, however, and start arguing about their own ambitions.

But Jesus doesn’t give up. He gathers them together and tries to explain what greatness really means. ‘If anyone wants to be first,’ he says, ‘he must make himself last of all and servant of all’.

The disciples would have been shocked by this statement, because children weren’t so highly valued in those days; they were considered less valuable than slaves. Why? It’s because their mortality rate was very high. Many parents tried to avoid the heartache of losing their children by distancing themselves from them until they reached maturity.

But Jesus’ point is that greatness comes not from power and glory, but from truly caring for the little ones – the most vulnerable in the community.

St James reinforces this message in today’s second reading, by contrasting worldly wisdom with the wisdom of God. He says that the pursuit of worldly power and ambition leads to rivalry, disharmony and conflict. But God’s way of servanthood leads to gentleness, compassion and peace.

We all share this struggle. It’s the struggle between our ordinary human desire to seek success, and the voice that’s always calling us to be faithful, wherever that might lead us.

Padre Pio understood this well. He once said, ‘The life of a Christian is nothing but a constant struggle against the self: there’s no flowering of the soul to the beauty of its perfection, except at the price of pain’.

But that price is worth it. As Michael Casey says in his book Balaam’s Donkey, ‘adults who are at peace with themselves, who are not clamouring for higher status, also make peace for others, building a healthy contentment and preparing the way for the action of God. A person who is content with little is not for sale, and their integrity is difficult to subvert.

‘On the other hand,’ he says, ‘someone who is always climbing has eyes only for the future, will do whatever has to be done to achieve their goal, and may not be aware that slowly the quality of their life is being eroded. One is happy, the other is not. One grows, the other shrinks.’ [ii]

This is a message we all need to savour, deep in our hearts.

Long ago, in the 12th Century, the French monk St. Bernard of Clairvaux was asked to name the three most important elements of the spiritual life. He replied: ‘humility, humility, humility.’

Humility means being truly honest about our strengths and weaknesses.

Greatness is putting them at the service of others, especially the little ones.