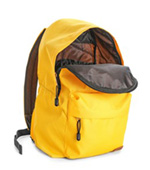 In the movie ‘Up in the Air’ (2009), George Clooney’s character is teaching a class of students. He asks them:

‘… How much does your life weigh? Imagine … you’re carrying a backpack. I want you to feel the straps on your shoulders … Now pack it with all the stuff you have in your life. Start with the little things. The things on shelves and in drawers, the knick-knacks, the collectibles. Feel the weight as it adds up. Then start adding larger stuff, clothes, table-top appliances, lamps, linens, your TV.

‘The backpack should be getting pretty heavy now. And you go bigger. Your couch, bed, your kitchen table. Stuff it all in there. Your car, get it in there. Your home, whether it’s a studio apartment or a two-bedroom house. I want you to stuff it all into that backpack. Now try to walk. It’s kind of hard, isn’t it? This is what we do to ourselves on a daily basis. We weigh ourselves down until we can’t even move. And make no mistake, moving is living…’ [i]

What he’s talking about here is letting go. Many people today would love to let go of all their burdens, their fears, their obsessions, their disappointments – everything that weighs them down. So, what stops them?

Bill Bausch tells the story of an old monk who’d been teaching a young disciple. After some time, he tells the disciple he’s ready to go out on his own. The young disciple then goes into the wilderness and lives in a simple hut near the river. Every night, happy as a lark, he puts out his simple tunic, his only possession, to dry. One morning he finds it’s been shredded by rats. So, he begs a second tunic from the villagers, but the rats destroy that too. He decides to get a cat.

But now he must beg food not only for himself but also milk for the cat. To get around that, he buys a cow. Now he needs food for the cow. So he works the land around his hut and it takes all his time to grow the crops to feed the cow. He hires workers and marries a wife who keeps the household running smoothly. Pretty soon he’s one of the wealthiest people in the village.

Several years later his teacher returns to find a mansion where the hut had been. ‘What’s the meaning of this?’ he asks. The disciple replies, ‘Holy Father, there was no other way for me to keep my tunic.’ [ii]

Bausch says this is the perfect parable for us. We all have to keep up appearances, maintain our status and have what everyone else has. And while we’re rationalising the way we live, he says no-one ever suspects that Jesus is looking at us with love, saying we can do better than that, for we’re not everyone else.

In today’s Gospel, a rich young man asks Jesus, ‘Master, what must I do to earn eternal life?’ Jesus reminds him of the Commandments, but he replies that he already obeys them. So, Jesus says, ‘Go and sell everything you own and give the money to the poor, and you’ll have treasure in heaven. Then come, follow me’.

But the young man just can’t let go of his attachments, and he walks away, sad.

Why is he sad? It’s because he’s been given a taste of heaven, but rejected it. He’s been given a glimpse of an exciting new world, but he’s too scared to let go of the old one.

Some people think this story means they must discard everything they own.  But not every disciple is asked to do that. Martha and Mary, you might remember, entertained Jesus in their own home.

Jesus isn’t asking us to live in poverty. He’s not expecting his disciples to be destitute. But he is calling us to live a life of simplicity and freedom. That means letting go of anything that holds us back, anything that separates us from God, such as money, status, our inflated self-importance or our unhealthy relationships. [iii]

Bill Bausch says that Jesus is looking on us with love, but it’s not the simpering, gushy love of greeting cards or insipid hymns.

Rather, it’s a tough love that reminds us that, good people that we are, we can do better, we must do better.

Too many of us today are drifting aimlessly through life.  And yet, deep down, we’re all hungering for meaning and purpose. We’re all yearning for the transcendent beauty of God.

Right now, Jesus is inviting us to follow him. What’s holding us back?

Can you let it go?