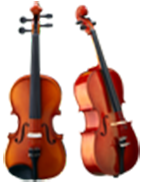 In his book Tuesdays with Morrie, Mitch Albom tells the story of a university basketball game. Their team is doing well, and the students are chanting, ‘We’re number one! We’re number one!’

But Professor Morrie is sitting nearby and he’s puzzled. He stands up and yells, ‘What’s wrong with being number two?’ The students look at him and stop chanting. [i]

Yes, what is wrong with being number two? So many people today think the only place to be is out in front, in first place. Anywhere else, they think, isn’t good enough. Yet, the great American conductor Leonard Bernstein was once asked, ‘What’s the hardest instrument to play?’ He replied, ‘Second fiddle’.

‘I can always get plenty of first violinists,’ he said, ‘but to find one who plays second violin with as much enthusiasm … now that’s a problem. And yet if no-one plays second, we have no harmony.’ [ii]

In the end, the first violin usually gets the credit, and the second often goes unnoticed. But the second violinist nonetheless has a vital role to play.

The success of so much in life depends on the skills and commitment of those who labour quietly in the background. Yes, sometimes there’s little recognition, but there is joy to be had from seeing things succeed, from helping others shine and knowing that we’ve played our part well.

One fine example of this is St John the Baptist, the forerunner who spent his life preparing the world for the coming of Jesus (Mk.1:1-8). John was the greatest preacher in the land, and he had many followers. But when Jesus arrived, he chose to play second fiddle and got out of the way (Jn.3:30). Yet Jesus said, ‘Among those born of women, none is greater than John’ (Lk.7:28).

John’s greatness was in emptying himself in the service of others. That’s exactly what Jesus did, too (Phil.2:5-11).

In Mark’s gospel today, the apostles James and John ask Jesus if they can sit on his left and right when he comes into his glory in heaven. In other words, they want to share in his greatness by having honours and privileges given to them. But Jesus replies, ‘You don’t know what you’re asking for.’

He then asks if they can drink the cup that he must drink. They say yes, but really, they don’t understand.

In Scripture, the word ‘cup’ often refers to suffering, especially the suffering that comes from being punished for one’s sins (Ps.75.8; Jer.25:15; Is.51:17). Jesus came to drink this cup on behalf of everyone. He immersed himself in the suffering we all deserve for our sins (Mt.26:39). He calls this immersion his ‘baptism’, because after dying on the Cross he returns to new life.

In my younger days, I used to think that life was all about making it to the top, becoming number one. But then I started noticing that we can often achieve good things much more effectively when we’re NOT number one. How? By being a positive influence. I also discovered that without the burdens of leadership, supporting roles can often be much more satisfying.

If you think about it, life is much like an orchestra. Like musical instruments, we all have our parts to play, at different times and in various ways. And the music we create is dynamic: sometimes there’s great drama, with crashing cymbals and drums, and sometimes there are quiet interludes, cushioned on sweet violins and flutes.

There are also times, like the harp and bassoon, when no-one notices us, and like the viola, when what we do is so very repetitive. But we’re all designed to work together to support and enrich the main tune, which is where joy and love are to be found – for everyone.

In the orchestra of life, some people insist on being the conductor. But they forget that he can’t make a sound, and he must always turn his back on the crowd.

Like second fiddle, the conductor’s job is to make others shine.

That’s something we can all do, anytime, wherever we are.