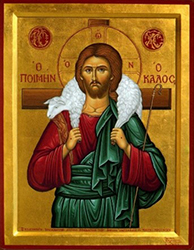 On the Shepherd and His Donkey

What’s the mark of a good shepherd? It’s that he truly loves his sheep. He cares for his whole flock, and each individual sheep, even when it’s dangerous to do so.

This is very different to the hired hand. As Jesus himself tells us, a hired hand only works for the money, and he’ll abandon his flock when a wolf appears. But the Good Shepherd has no greater priority. His flock is his life.

We all know how faithful our Good Shepherd is, don’t we? He is the One who rode into Jerusalem on a donkey and died for his flock soon afterwards.

Now, there’s another good man with a donkey we should remember, because today is also Anzac Day. Every Anzac Day, of course, we remember with deep gratitude all the servicemen and women who sacrificed their lives for our country. [i]

This other man with a donkey is the legendary Private John Simpson. [ii]

John Simpson was born in England in 1892, into a poor family of 8 children. When he was young, he helped support his family by working as a donkey-lad during the school holidays. In those days, children paid a penny for a donkey-ride, and Simpson used to walk with the animals and look after them.

In 1909, at the age of 17, Simpson joined the British Merchant Navy. When his vessel reached Australia, he jumped ship and went to work in the cane fields of Queensland, and the gold mines of Western Australia.

Then, in 1914, soon after WWI began, he joined the Australian Army’s 3rd Field Ambulance as a stretcher-bearer.

As soon as he and the other Anzacs landed in Gallipoli in 1915, they were attacked. And just as a shepherd carries wounded sheep on his back, Simpson quickly started carrying injured soldiers back to the beach.

The next morning, he found a donkey. He called it ‘Murphy’, and for the next 24 days Simpson and his donkey shared the burden of carrying wounded soldiers to safety. They worked day and night, rescuing over 300 men, ignoring the bullets and shrapnel all around them.

Simpson was a cheerful young man. He often sang and whistled as he worked, and he carried his pet possum in his slouch hat wherever he went.

He never fired a single shot, though; he never killed an enemy soldier, and all who knew him said he was a good man ‘to have beside you when the whips were cracking’.

Neither John Simpson, nor his donkey, ever received a military award. Yet they surely represent the pinnacle of heroic goodness and noble sacrifice. [iv]

Jesus tells us that there’s no greater love than to lay down one’s life for one’s friends (Jn.15:13). Why does he say this? It’s because genuine love, freely and unconditionally given, invariably involves some form of sacrifice.

The deeper the love, the greater the potential sacrifice.

Like the Good Shepherd who laid down his life for his sheep, John Simpson set aside his self-interest and his personal comfort to look after the needs of others. And just like a good shepherd, he carried lost, wounded and frightened men to safety.

Today, we are reminded that many people around us still need the love and protection of a good shepherd. There are lots of wolves prowling around in our world today, and many people are vulnerable.

That’s why today is also the World Day of Prayer for Vocations, when we are all asked to pray for our modern-day priestly shepherds, and to consider whether we, too, might be called to shepherd others.

So, here’s the question: are you being called to serve as a good shepherd, by being kind, compassionate and merciful to others, just like Jesus?

Are you being called to help rescue the lost, the wounded and the frightened, just like Private John Simpson?

And are you being called to the priesthood, diaconate or religious life?

Whatever our calling, each of us can surely do something meaningful to help those who struggle. What might that be?

Jesus has set the example.  Now it’s our turn.

[i] Anzac Day is the solemn day of remembrance of all the Australian and New Zealand Army Corps soldiers who fought and died for their country. Each year it occurs on 25 April, the anniversary of the Gallipoli Campaign, their first engagement in World War One.

[ii] John Simpson was born John Kirkpatrick, in South Shields, England. He joined the Merchant Navy under his original name. But having jumped ship when his ship arrived in Newcastle, Australia, he thought it wiser to use his mother’s name Simpson when he joined the army.