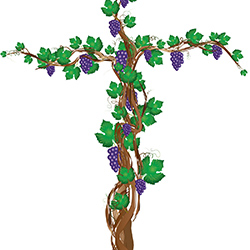 On the Great Vine

Today, 253 years later, the Great Vine (as it’s known) is the oldest and largest grapevine in the world. It measures 4 metres around its base, its longest arm is 36.5 metres long and it’s still producing plenty of good fruit. Why? Because it’s lovingly trained, trimmed and nourished every year.

That’s the metaphor Jesus uses in John’s Gospel today. He’s speaking to his disciples just after the Last Supper, and he knows it’s his last chance to teach them, for soon he’ll be crucified.

Jesus warns his disciples that great trials are coming, but they must stay strong in the faith. ‘I am the vine, God is the vinedresser and you are the branches,’ he says.

Through our Baptism, each of us is joined to Jesus. We become branches of his vine, but we need to stay connected to him and keep drawing nourishment from him if we are to grow and thrive.

This is what happens to Paul in today’s first reading. After persecuting the Church, he receives the Holy Spirit at his conversion (Acts 9:10-21) and he becomes an incredibly powerful and fruitful branch of Jesus’ vine.

As Christians, we, too, are expected to bear fruit. After all, that’s what grapevines are supposed to do. But if a branch produces nothing, there’s a problem. It’s either dead, diseased, or poorly connected to the vine, and the vinedresser needs to cut it off.

Indeed, even if a branch is healthy and bears good fruit, sometimes it still needs to be carefully trimmed to make it stronger and more productive.

This is an important lesson for us. Jesus is saying that even if we are good Christians, God will still cut us back occasionally to help us become stronger and more fruitful.

In other words, we need to see our hardships through the eyes of faith. Our sufferings and trials may be painful, but God is using them to shape us and help us become better people (Heb.12:4-11).

And here’s another insight. Richard Leonard says that we might claim to be Christians and go to church every Sunday, but if the fruit we produce is bitter or poisonous; if we are unforgiving, unjust and uncaring, then we cannot claim to be on the vine of Christ’s love.

If this is the case, he says, then we desperately need the gentle hand of the vinedresser, who only wants to see us produce the yield he knows we are capable of achieving.

But here’s the point: God won’t judge us simply by our words or by the public face we put on. He’ll judge us by our acts of kindness, compassion and love. [ii] For ‘it’s by their fruits you shall know them’ Jesus says (Mt.7:16).

So, what are these fruits? Paul tells us: they are love, joy, peace, patience, kindness, generosity, faithfulness, gentleness and self-control (Gal.5:22). These are the fruits we can expect to produce if we stay connected to Jesus.

And how might we stay connected? By truly loving God and each other; by being actively involved in the life of his Church, and by making time for daily prayer and reflection.

There, he finds himself seduced by the seven deadly sins, and he becomes disconnected from his roots. He loses his faith and all his hopes fade into emptiness.

As the film ends, there’s a powerful scene where Marcello is alone on the beach, looking down at a large dead fish washed up on the shore. Cut off from the sea and its source of life, that fish has died.

Fellini ends the movie there, leaving us to make the connection between the dead, decaying fish and the empty, faithless and cut-off Marcello.

Some people today are like that fish on the shore; they are like Marcello who has lost his faith. They are branches that have separated from Jesus’ great vine, thinking they can go it alone.[iii]

But as Jesus tells us, ‘Whoever remains in me, and I in him, bears fruit in plenty. But cut off from me you can do nothing.

‘Anyone who does not remain in me is like a branch that is thrown away – he withers.’