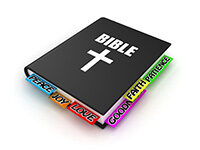 On Digging for Gold

What’s the best-selling book of all time? According to the Guinness Book of Records, it’s the Bible. So far, over 5 billion copies have been sold, and it’s been translated into 349 languages. [i]

As an old hymn says: God has given us a book full of stories, made for his people of old. / It begins with the tale of a garden, and ends with the city of gold. [ii]

When asked to explain why, some people say it’s because it’s out of date, or they’re too busy, or they simply don’t understand the Bible. And yet, lots of people today are searching for meaning and purpose in their lives. They’re looking for answers to the big questions of life.

It’s for this reason that Pope Francis has been encouraging us all to get to know the Holy Scriptures so much better. In 2019 he declared the 3rd Sunday of Ordinary Time each year to be the Sunday of the Word of God. In Australia, this day clashes with Australia Day, so it has been moved to the first Sunday in February. [iv]

Pope Francis said that the purpose of this celebration is to help us to ‘better appreciate the inexhaustible riches contained in that constant dialogue between the Lord and his people’. However, he said, it’s not to be seen as a yearly event, but a year-long event, for we urgently need to grow in our knowledge and love of the Scriptures and of the risen Lord himself. [v]

Now, some people are turned off by the size of the Bible. But remember that it’s not one single book; it’s actually a small library of books, and you don’t have to read them all. It includes all kinds of literature, from history, prophecy, poetry, law, wisdom, letters and parables, to the greatest stories of all time. It has inspired saints; it has led to miracles and it has given hope and meaning to countless people across the world.

Some people have also found the language in the Bible difficult to follow, but this was never meant to be. These books were written over a period of about 1,000 years by simple people, like fishermen, tentmakers and shepherds, who wanted to record their personal experience of God’s active involvement in the world. They never intended their language to be mysterious, but cultures do change over time.

Thankfully, there are now many different translations, dictionaries, commentaries and maps available to help us understand what it’s all about.

But Richard Rohr, the Franciscan theologian, gives us a warning.

He says that for all its inspiration, all its marvellous one-liners, and all the lives it has changed, there’s still a problem with the Bible, and that’s because some people misuse it. History shows us that some people have used Scripture to justify things like genocide, slavery and the burning of heretics.

Rohr says that when we put the Bible in the hands of egocentric, unloving or power-hungry people, or those who’ve never learned how to read spiritually inspired literature, it’s almost always a disaster. Only converted people can be trusted with spiritual writings, he says. [vi]

So, to properly understand the Bible, it’s important that we read it with the mind of Christ (Rom.12:2; 1Cor.2:16). We need to use Scripture in the same way that Jesus did, by approaching it prayerfully and seeing everything through his lens of mercy, justice, love and forgiveness.

With that in mind, let’s close with a story.

The Beta Hunt gold mine in Kambalda, Western Australia, has been working for almost 50 years. After all this time, many thought that it must be nearing the end of its useful life.

But in recent years, miners there have discovered two of the biggest gold specimens in recorded history. One rock contained 65 kg of gold, and another had 60 kg of gold. The combined value was nearly $7 million. [vii]

Despite its age, that mine clearly has plenty of life left in it.

This is just like the word of God. People have been mining it for centuries, but it still hasn’t given up all its treasures.

So, today, let’s all do the same. Let’s dust off our Bibles and start digging for some real spiritual gold.