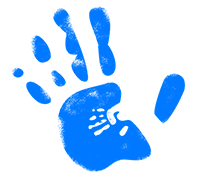 On Our Healing Hands

How did Helen Keller (1880-1938) learn to speak, read and write, when she was blind and deaf? How did she become a famous lecturer, author and campaigner for people with disabilities when she could neither see nor hear?

It was through the loving hands of her teacher, Anne Sullivan. Anne began teaching Helen by ‘fingerspelling’: tracing words such as ‘d-o-l-l’ onto the palm of her hand, when she was seven.

At first Helen couldn’t connect the letters she felt with the objects she held. Then one day Anne put Helen’s hand under running water. On the palm of her other hand, she spelt ‘w-a-t-e-r’ and Helen understood immediately. Excitedly, she then touched the earth and wanted to know its letter name, too. By nightfall she had learned 30 words. [i]

Our hands, and our sense of touch, play an important part in our lives. Scientists tell us that touch is the first sense we develop in the womb, and that social touching is critical to every child’s development. As well, they say that our fingers are more sensitive than our eyes, and touching often communicates emotions more effectively than voice or facial expressions. [ii]

‘Tis the human touch in this world that counts.
The touch of your hand and mine
Mean far more to the fainting heart,
Than shelter or bread or wine.
For shelter is gone when the night is o’er,
And bread lasts only a day,
But the touch of a hand and the sound of a voice
Sing on in the soul always. [iii]

He also touches a leper in Mark’s Gospel today.

In ancient Israel, anyone with leprosy or any other skin complaint was considered highly contagious and ritually unclean. They were banished by law from their family and community. But this leper is desperate. He risks being stoned to death for approaching Jesus. And Jesus breaks the law, too, by touching him.

‘Be cured!’ Jesus says, and the man is cured. He can now return to normal life. He’s so excited that he tells everyone.

But why does Jesus touch him? It’s because he needs more than a physical cure. He needs spiritual healing, too. He needs to feel whole again.

Have you ever noticed that every sacrament involves touching? In Baptism we trace the sign of the cross on the forehead. In Confirmation we do the same, but using the Oil of Chrism. In the Holy Eucharist we touch the body of Christ with our hands and our tongues. In Reconciliation, the priest places his hand on or close to the penitent’s head. In Matrimony, the couple hold hands during their vows and they exchange rings. In the Anointing of the Sick, the head and hands are anointed with oil. And in Holy Orders, the bishop places his hands on the ordinand’s head.

Love, and our Christian faith, are both communicated by touch. Our life of faith today has been literally handed on to us by successive generations over 2,000 years, all the way back to the sacred touch Jesus gave his apostles, and the mystical touch God gave Mary when she bore Jesus.

Every day St Teresa of Calcutta used her hands to express Jesus’ love for the sick and poor. She once said, ‘We have drugs for people with diseases such as leprosy. But these drugs don’t treat the main problem, the disease of being unwanted. That’s what my sisters hope to provide.’

‘An alcoholic in Australia told me,’ she said, ‘that when he is walking along the street, he hears the footsteps of everyone coming towards him or passing him becoming faster. The feeling of being unwanted is the most terrible poverty of all.’

A loving touch, however, can change all that. In the Parable of the Prodigal Son, when the wayward son returns home, his father runs to him, throws his arms around him and kisses him (Lk.15:20). They both feel whole again.

In the 14th Century, St Catherine of Siena tried to help an unhappy woman who had leprosy. The woman abused her constantly, but by gently caring for her with her hands, St Catherine won her over and the woman died in her arms. [iv]

Today, Jesus has no hands but ours, and he wants us to use them to heal hurts and help change lives. We can do this in so many ways; perhaps by writing a nice note, or by simply giving a wave or a hug, or by offering someone a helping hand.

We all have healing hands. How might you use yours to help someone?