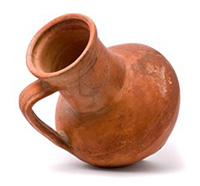 On the Widow’s Cruse

‘We could all do with the widow’s cruse,’ my dear father used to say, and he was right.

What is a cruse? It’s a small earthenware jar for liquids, and the widow’s cruse is a small supply that never runs out.

This expression comes from the story of Elijah and the widow in our first reading today. During a terrible drought, Elijah asks the poor widow of Zarephath for a drop of water and a scrap of bread. But all she has to feed herself and her son is a small handful of meal in a jar and a little oil in a jug.

She knows, however, that God wants her to do this, so she makes Elijah some bread and God rewards her by ensuring that her jars of food are never empty.

There’s a similar story in the life of St Frances of Rome (1384-1440). During a great famine, many poor people came to her seeking alms, but her father-in-law resented her generosity. He cut off Frances’ supplies and left her with only a small amount of corn and wine for herself. But because she was doing God’s work, the corn never ran out, and the wine cask never ran dry. [i]

Today in Australia we celebrate the Feast of St Mary of the Cross McKillop (1842–1909). She, too, was blessed with the widow’s cruse.

Mary was born the first of eight children to Scottish migrant parents, Alex and Flora McKillop, in Melbourne. Alex was a former seminarian, but quite hopeless with money and soon after Mary’s birth they lost everything, including their house.

To help pay the bills, Mary started working as a governess when she was 14. At 18, she moved to Penola, South Australia, to care for her nieces and nephews. There she met the local parish priest, Fr Julian Tenison-Woods, who was very interested in educating poor children.

Mary later wrote: ‘I heard the Pastor … Speak of the neglected state of the children in the parish … I had to go and offer myself to aid him’. And so began her teaching career.

When she was 20, Mary was accidentally locked overnight in a church in Portland, Victoria. She later described this as a graced opportunity, because her all-night vigil with Jesus changed her life.

In 1866, aged 24, she started wearing a simple habit as the first member of a new religious institute, the Sisters of St Joseph of the Sacred Heart (the Josephites) that she established with the help of Fr Woods. They were determined to teach and serve the poor and vulnerable, and they opened their first school in a former stable in Penola.

In the following years, and with no government funding, Mary and her growing circle of sisters opened schools all over Australia and New Zealand. They also cared for Aborigines, unmarried mothers and the terminally ill, and established orphanages, shelters for former prostitutes and refuges for ex-prisoners.

As her missionary work grew, so did Mary MacKillop’s problems. Money was always scarce and many civic leaders and members of the public strongly objected to her work. Some powerful churchmen, including Bishop Shiel of Adelaide, objected to her independent spirit and she was falsely accused of alcoholism.

In 1871, Bishop Shiel excommunicated her for alleged insubordination. He also closed most of her schools and dispensed fifty sisters of their vows.

Mary faced obstacles all through her life, but her faith and determination were unshakeable and she refused to speak ill of anyone. In the following year, Bishop Shiel reversed his decision. [ii]

Mary MacKillop began with nothing, but by the time of her death in 1909, she had 650 Josephite sisters teaching 12,400 students in 117 schools, and serving poor Catholics and Protestants alike. [iii]

In 2010, Pope Benedict XVI canonized her as Australia’s first saint.

Mary MacKillop famously told her sisters, ‘Never see a need and do nothing about it’. And she always encouraged them to ‘strive to please God, rather than men, and always be ready to sacrifice everything for Christ’.

In return for her faithful service, God gave her the widow’s cruse. She always got what she needed, when she needed it.

‘Do not worry,’ Jesus says in our Gospel today. ‘God knows your needs. Just focus on what God wants you to do, and he will supply what you need.’ [iv]

That’s the widow’s cruse. We could all do with it.

By the poor widow’s oil and meal
Elijah was sustained;
Though small the stock it lasted well,
For God the store maintained.

It seemed as if from day to day,
They were to eat and die;
But still, though in a secret way,
He sent a fresh supply.

Thus to his poor he still will give
Just for the present hour;
But for tomorrow they must live
Upon his word and power.

No barn or storehouse they possess
On which they can depend;
Yet have no cause to fear distress,
For Jesus is their friend.

Then let not doubts your mind assail,
Remember, God has said,
The cruse and barrel shall not fail,
My people shall be fed.

And thus though faint it often seems,
He keeps their grace alive;
Supplied by his refreshing streams,
Their dying hopes revive.

Though in ourselves we have no stock,
The Lord is nigh to save;
His door flies open when we knock,
And ’tis but ask and have. [v]

[iv] It’s worth remembering that the words ‘Do not be afraid’ occur 62 times in the Old Testament, and 18 times in the New Testament.