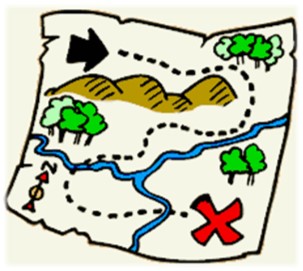 Today, let’s talk about treasure:  in fact, let’s consider two family treasures that are too often overlooked.  The first is our grandparents, who we celebrate today.

When people think of Jesus being raised as a boy, they usually only think of Mary and Joseph.  But his grandparents played a vital role, too. They were Saints Anne and Joachim, whose feast day was on Friday (26 July).

Anne and Joachim were Mary’s parents.  They knew she was a gift from God because they’d had great difficulty conceiving a child.  Their faith, patience, wisdom and love had a profound influence on Mary, and on Jesus as well. It was they who chose Mary’s husband, Joseph.  And it was their good parenting that taught Mary to be a wonderful mother. St John Damascene described them as a ‘blessed’ and ‘spotless’ couple to whom all creation is indebted.

In 2013, Pope Francis called all grandparents a ‘treasure’, and said that Anne and Joachim were part of a long chain of people who had transmitted their love for God, and expressed it in the warmth and love of family life.

‘How important grandparents are for family life,’ he said, as he stressed the importance of intergenerational dialogue, especially within the family. Children and the elderly, he said, build the future of peoples: children because they lead history forward; and the elderly because they transmit the experience and wisdom of their lives.  ‘This relationship and dialogue between generations is a treasure to be preserved and strengthened,’ he said.

But I wonder: what kind of relationship do we actually have with our elders?

I recently saw a short film called ‘The Mailbox’ (1977).  It tells the story of an old widow named Leethe who loved her family, but they all lived some distance away.  She loved getting letters, but her children rarely ever wrote, they rarely ever called. Every day she walked to her mailbox.  Every day it was empty.

That was, until one day she did find a letter.  She was so excited. She rushed into the house to get her glasses.  But as she opened the envelope she had a heart attack and died. What was in that letter?  It was a message from Leethe’s daughter, telling her that it’s time to go into a nursing home.

Our grandparents are a treasure, and Pope Francis says the elderly are ‘like a fine vintage wine’.  ‘But’, he adds, ‘we live in a time when the elderly don’t count.  It’s unpleasant to say it’, he says, ‘but they are set aside because they’re considered a nuisance.  And yet, the elderly pass on history, doctrine and faith and they leave them to us as an inheritance.’

We owe so much to our grandparents, not least for our very existence.  They’ve played a significant role in our lives, both directly and indirectly.  And despite any flaws, we have much to thank them for.

The second family treasure I’d like to mention briefly is embedded in today’s Gospel.  It, too, is too often overlooked. It’s the Lord’s Prayer. It was given to us by Jesus, through his Apostles who had asked him to teach them how to pray.

The version we use comes from Matthew (6:9-13), and if you look closely you can see that it includes seven petitions.  In 1979 Pope St John Paul II said that everything that can and must be said to the Father is contained in those seven requests.

He also said that there’s such simplicity in them that even a child can learn them, and also such depth that a whole life can be spent meditating on the meaning of each of them.

In our throwaway society, it’s so easy to discard precious things.  Our grandparents are fundamental to our families and to society. They’ve given us love, encouragement and support, and they connect us with our history, heritage, culture and faith.

St. Thomas Aquinas called the Lord’s Prayer ‘the perfect prayer’ and the second century theologian Tertullian said it summarises the whole Gospel.  It binds us to our heavenly Father and to every other member of our Christian family.  But it, too, is easily overlooked.

Today, let’s combine these two great family treasures by praying for our grandparents, using the words that Jesus himself gave us:

Our Father, who art in heaven, hallowed be thy name.  Thy kingdom come, thy will be done on earth, as it is in heaven.  Give us this day our daily bread and forgive us our trespasses as we forgive those who trespass against us.  And lead us not into temptation but deliver us from evil.