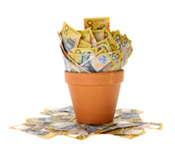 Do you remember the American entertainer Liberace? It was he who coined the term ‘Laughing all the way to the bank.’

For a while Liberace was the world’s highest paid performer. At his height, he spent five million dollars a year, a huge sum in those days. When he died in 1987, he left behind eight warehouses full of things that couldn’t fit into any of his five fully furnished homes. [i]

Surely this is greed: craving something you like, when you really don’t need it.

In the movie Wall Street, Gordon Gekko says that greed is good. ‘Greed works,’ he says. ‘Greed clarifies, it cuts through and captures the essence of the evolutionary spirit…’ [ii]

Someone once argued that without greed, we’d all still be living in caves. But greed is also one of the seven deadly sins. It consumes people. It clouds our vision, it destroys our sense of peace and gratitude, it corrupts our behaviour and it causes conflict and division.

In today’s gospel, Jesus is talking to a large crowd, when a man calls out: ‘Master, tell my brother to give me a share of our inheritance’. He’s been fighting over money, but Jesus doesn’t want to get involved.

Instead, he starts teaching the crowd about greed, and he tells the parable of a rich man who’s had a great harvest. He’s planning to build bigger barns to store his new wealth, and then spend it all on a life of pleasure.

Today, many would admire this man’s success. Yet, Jesus calls him a fool. Why?

Firstly, he’s only concerned about himself. He uses the words I or my eleven times, and not once mentions God or anyone else.

God doesn’t bless us with riches so that we can be selfish. The fact is that everything comes from God, and he expects us to use whatever we have wisely, to benefit others as well as ourselves (Eph.4:28).

Secondly, his barns are full, but his heart is empty. The only thing he cares about is money and the pleasure it gives him. His success, and the comfort it brings, is blinding him to his spiritual poverty (Rev.3:17).

And finally, he’s forgotten about time. He dies soon afterwards and has nothing to show for his life before God (Dt.16:16-17).

When we think about it, this parable really isn’t about money. It’s about our values and the way we live our lives. Being wealthy isn’t wrong, but what is wrong is not using our blessings to help others.

Let’s close with a story. A countryman once knocked on a monastery door. When the monk at the door opened it, he gave him a big bunch of grapes saying ‘Brother, these are the finest grapes in my vineyard. They are my gift to you.’

‘Thank you!’ the monk replied. ‘I’ll take them to the abbot. He’ll love them.’

‘No, they’re for you,’ the countryman said. For whenever I knock on this door, you always open it. When I needed help in the drought, you gave me bread and wine every day.’

The monk admired the grapes all morning, and then he gave them to the abbot, for he’d always encouraged him with wise words.

The abbot was delighted, but another brother was sick. ‘I’ll give him the grapes,’ he decided. ‘Perhaps they’ll give him joy.’

But the sick man didn’t keep the grapes for long. ‘The cook has always looked after me,’ he said. ‘I’m sure he’ll enjoy these.’

The cook was amazed by these perfect grapes. ‘No-one would appreciate them more than the sexton,’ he thought. ‘He’s such a holy man.’

The sexton then gave the grapes to the youngest novice, so that he might appreciate the wonder of God’s creation.

But when the novice received them, he remembered his first visit to the monastery, and the kind monk who had welcomed him at the door. It was that welcome that inspired him to join this community.

And so, that evening, he took the grapes to the monk at the gates. ‘Eat them and enjoy them,’ he said, ‘for you spend most of your time here alone, and these grapes will make you happy.’

That monk finally understood that this gift was meant for him. He relished those grapes, before falling into a pleasant sleep. [iii]

This, then, is our choice: either the joy of sharing, or the dead-end of greed.