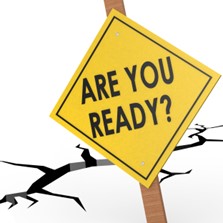 Life began as normal in Pompeii on August 24, 79AD. Children played, parents went to market and the rich soaked in thermal baths.

Then at lunchtime, Mt Vesuvius erupted, spewing out huge amounts of hot ash, molten rock and poisonous gas. The city was destroyed and some 16,000 people perished.

The sad thing is that they had all been warned. They knew this was an active volcano, for it had erupted 16 years earlier and they were still repairing the damage. The earth had been rumbling and shaking for days, and there was plenty of smoke. But they chose to ignore these signs. [i]

Signs are important. They warn us of danger and help us prepare for what’s coming. They’re also everywhere: on beaches, roads and train stations. Traffic lights turn orange before going red, and many products have ‘use-by’ dates.

It’s risky to ignore signs; they’re there for a reason.

Out in the Judean Desert, John the Baptist warned everyone to ‘prepare the way of the Lord’ (Mk.1:3). Many took him seriously, but some, like the Rich Man in last week’s gospel, didn’t. He was too busy with his treasure to think about anything else, and he found himself totally unprepared for his sudden death.

In Luke’s Gospel today, Jesus repeats this warning for us. ‘Stand ready,’ he says, ‘for the Son of Man is coming at an hour you do not expect’.

Many people think they don’t have to worry about this, because they won’t be around when Jesus returns. But Peter Kreeft, in his book Food for the Soul, says that’s wrong. ‘You certainly will (be around),’ he says, ‘because you will die, and your death is the end of the world for you, the end of your world, and that’s when you’ll meet Christ.’

‘If that sounds scary,’ he adds, ‘it shouldn’t, because Jesus begins his sermon today with the words Fear not, little flock. We are his flock, his sheep; he is the good shepherd, and he takes care of us.’ [ii] But we must prepare ourselves.

One person who reads the signs is the American actor Denzel Washington. In a recent interview, he spoke about his Christian faith and the warning signs we’re seeing in our world today.

‘This is spiritual warfare,’ he said. ‘If you don’t have a spiritual anchor you’ll be easily blown (away) by the wind.’ [iii]

At a graduation ceremony in Louisiana, he said that when he was 20, he was visiting his mother’s beauty shop, when a woman he didn’t know looked into his eyes and asked for a pen.

‘I have a prophecy,’ she said, writing down the details. She told him, ‘Boy, you are going to travel the world and speak to millions of people.’

Washington said that her words never left him. ‘I have travelled the world and spoken to millions of people,’ he said, ‘but that’s not the most important thing.’

‘I’ve been protected. I’ve been directed. I’ve been corrected,’ he said. ‘I’ve kept God in my life and he’s kept me humble. I didn’t always stick with him, but he’s always stuck with me… If you think you want to do what you think I’ve done, then do what I’ve done. Stick with God.’

And he warns: ‘Success will never be enough in life, because you’ll never see a U-Haul behind a hearse. I don’t care how much money you make; you can’t take it with you. The Egyptians tried it. They got robbed… It’s not how much you have, it’s what you do with what you have.’ [iv]

Denzel Washington is like the servant in today’s Gospel, waiting for his master to return home from a marriage feast. His lamp is lit; he’s ready for action; and when his master arrives, he knows he’ll be rewarded for his faithfulness.

This is what Jesus is asking of us now: to be ready for him and to do whatever God wants of us at any time. Our attitude before that moment will be critical to the way we respond to him.

So, let’s open our eyes, hearts and minds and get ourselves ready.

Just like Mt Vesuvius, there are lots of warning signs around our world today. Let’s not be caught unprepared.