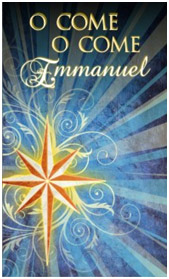 On the Paradox of Advent

Jesus has many names.  He’s the Dayspring (Mal.4:2; Lk.1:78), the dawn of God’s kingdom and light of the world who banishes the darkness.

He’s the Key of David (Is.22:22) who rescues us from hell and unlocks the door of heaven.

He’s the Rod of Jesse (Is.11:1), who springs from a dead stump and frees his people from slavery to sin.

Today marks the beginning of a new liturgical Year C, and a fresh season of Advent.  Advent, of course, is all about preparing our hearts and minds to receive Jesus at Christmas.

Every year at this time we sing ‘O Come, O Come Emmanuel’.  The English hymn as we know it today dates from the 1850s, but the words are ancient, dating back to 8th Century Gregorian chant.  The tune is from the 15th Century.

In the original Latin, this hymn had seven verses, each focussing on one of the Old Testament names for Jesus, like the Dayspring, the Key of David and Rod of Jesse.  Together, they summarise the Bible’s prophecies about the coming of Jesus as the Messiah and his work among us.  They tell us how Jesus ransoms us from our captivity to sin and death, and sets us free. [i]

Each year, in the week before Christmas, Benedictine monks used to sing or chant one verse each day to prepare their hearts and minds for Christ’s coming.

One interesting detail in the Latin hymn is that the first letter of each name for Jesus (Sapientia, Adonai, Radix Jesse, Clavis David, Oriens, Rex Gentiem, and Emmanuel) spells SARCORE.  Backwards, this acronym reads ‘Ero Cras’, which means ‘Tomorrow I come’. [ii]

That’s our focus in Advent: the coming of Jesus Christ.

There are three comings of Christ. The third is invisible.

St Bernard of Clairvaux (1090-1153) was a French abbot and Doctor of the Church.  He said that there are three comings of Jesus Christ. [iii]  The third coming, he said, is invisible and lies between the other two, which are visible.

Jesus’ first coming is his birth in Bethlehem.  It’s visible and it’s what we celebrate at Christmas.  But Jesus did so much more than arrive as a baby.  He also died for us on the Cross and rose again to new life.  So we also celebrate him as the Son of God who sacrificed everything to demonstrate his love for us and to show us how to join him in heaven.

Jesus’ second coming is also visible.  It will be at the end of our lives and at the end of all time.  That’s when Jesus will come in his glory and we’ll finally see him face-to-face (2Thess.1:6-7).

And in between is his third coming.  It’s invisible.  It’s the hidden appearance of Jesus that’s already happening right now, but only some of us can see him.  Where do we see him?   We see him in the Word, in the Holy Eucharist, in the Church, in our neighbours and in our personal lives.

But why can’t some of us see him?  It’s because we haven’t opened our eyes, our minds and our hearts to his presence among us.

St Bernard said that because Jesus’ third coming lies between the other two, it’s like a road on which we travel from the first coming to the last.  In the first coming, Christ was our redemption.  In the last coming, he’ll appear as our eternal life.  And in between he’s our rest and consolation.

In his first coming, Jesus arrived in our human flesh and in our weakness.  In the middle he comes in spirit and in power.  And in his final coming we’ll see him in all his glory and majesty.

St Peter predicted that some people would ridicule the idea of Jesus coming again.  He was right; many people do just that.  But don’t forget, he says, ‘that the Lord’s patient with you, not wanting anyone to perish, but everyone to come to repentance.’  So he gives us time to prepare ourselves.  But the day of the Lord will come ‘like a thief’, Peter says, when we least expect it (2Pet.3:3-10).

So, whenever we sing ‘O Come, O Come Emmanuel’, we’re not just celebrating the birth of Jesus, our Saviour.  We’re also preparing our hearts for his return, both in this life and in the next.

For at the very heart of Advent is this paradoxical mystery: