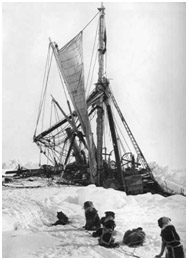 On Waiting in Ice and Heat

Today’s the second Sunday of Advent, and we’re reminded that it’s time to prepare because Jesus is coming.

Let me tell you a story.

In 1914, the explorer Ernest Shackleton sailed from London on the ship Endurance with 27 men.  He planned to be the first man to cross Antarctica.

But as he and his men approached the frozen continent they were trapped by pack ice.  Ten months later the ice crushed their ship and they had to abandon her.

Taking three lifeboats, they started walking. Six months later they arrived on Elephant Island.  When the ice started breaking up, Shackleton decided to take a chance and get help.  He promised to return, and with five men he sailed 1300 km in a lifeboat to South Georgia.

At the whaling station there he borrowed a boat and tried to return to his men, but the ice stopped him.  He wouldn’t give up, however, because of his promise, and tried another three times.  On his fourth attempt, as he approached Elephant Island the ice briefly opened up.  He took a risk, dashed in and collected his men.  He was in and out of the island in an hour.

As they sailed to safety, Shackleton said to one of them, ‘Well, you were packed and ready, weren’t you?’

We never lost hope – we believed you’d come for us.

The man replied, ‘Yes, we never lost hope.  We believed you’d come for us, even though it seemed unlikely.  You’d promised, and we expected you.  Each morning we rolled up our sleeping bags and packed all our equipment, so that we’d be ready’.

They knew Shackleton would return for them, so they made sure they were ready.  They’d waited for him for 105 days and all were saved.

In our Gospel today, John the Baptist emerges from the desert and tells everyone to get ready, because the Messiah is coming.  He says ‘prepare the way of the Lord, for he is near’.

Jesus wants to come into our hearts right now.  But are we ready for him?

As St Charles Borromeo once put it, Jesus is ready to come again spiritually at any moment.

As Christians, Advent is the time of year when we’re called to prepare ourselves for Jesus’ return.  We know he’s coming for us.  In John 14:1-6, Jesus says: ‘Trust in God still, and trust in me. … I’m now going to prepare a place for you, and after I’ve gone and prepared you a place, I shall return to take you with me; So that where I am you may be, too.’

But will we be ready and waiting for him, like Shackleton’s men?

Yes, what will Jesus find when he comes this Christmas?

What would Shackleton have thought if his men had not been ready for him?

In our second reading today, St Paul tells the Philippians that he prays that they might learn to value the things that really matter, and that they might come to love each other, just as Jesus loves them.

The season of Advent is a free gift to each of us.  It’s an invitation to take time out, to reflect on the truth of Jesus Christ: his birth and his life, and what that means for us personally.

In the ice of Shackleton’s Antarctica and in the heat of St John the Baptist’s desert, there are few comforts and few distractions.  The truth is plain to see.

Shackleton’s men knew they had to get ready for his return, and they did.  John the Baptist knew the Messiah was coming, and he warned everyone to get ready.

At the typical Australian Christmas, there’s both ice and heat.  When you see the ice think of Shackleton.  When you feel the heat, think of John the Baptist in the desert.

But whatever you do, make sure you’re ready for Jesus’ return.

For Jesus is coming.