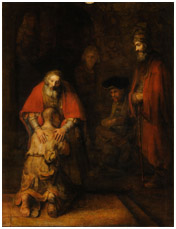 Rembrandt’s masterpiece The Return of the Prodigal Son has been called one of the greatest paintings of all time.[i]  I saw it last year at the Hermitage Museum in St Petersburg.  It’s much bigger than I expected, at 262 x 205 cm (8.5’ x 7’).  Rembrandt painted it shortly before he died, penniless, in 1669.

This painting gives us a snapshot of the action in Jesus’ famous parable, from Luke’s Gospel today.  But it also depicts some of Rembrandt’s own story.

Look closely.  There are six people in front of a dark archway, but we can only clearly see three.  On the left, the elderly father is embracing his younger son who has just returned home, feeling deeply ashamed.  He has squandered his inheritance on a life of debauchery and now he’s desperate.  His clothes are filthy and torn.  His shoes are ruined.  Like a convict, his head has been shaved.  His eyes are swollen and his skin looks sickly.  He has a rope for a belt and a dagger for protection from the outside world. He’s kneeling and begging his father for forgiveness.  He wants to come home.

There’s a warm glow about the father.  He looks wise and gentle.  His left eye is blind and his right is fixed on his son.  His red robe symbolises the pain of martyrdom, the fire of the Holy Spirit and the blood he shares with his two sons.

The father, of course, represents our loving God.  He’s delighted to have his son back. We can see the love, mercy and forgiveness flowing down from his bowed shoulders into his hands as he caresses and blesses the boy.  One hand is soft and feminine, the other is broad and masculine.  These healing hands remind us that God is both our mother and our father, and that God is always so much more than we can ever imagine him to be.

Emerging from the gloom on the right is the elder son, dripping with envy.[ii]  We can see this in his rigid back, his lowered eyes, his wringing hands and his distance from his brother.  He has served his father well – he’s never once disobeyed him. Yet, now this sinner, this brother of his, is being rewarded for doing just the opposite.

The other three people in the darkness are unknown.  One might be the mother; the others could be servants.  But Rembrandt often used light to emphasise the presence of goodness and love and the power of God’s divine mercy (Jn.1:5; Jn.12:46). He also used shadow to indicate the presence of sin (Jn.3:19-20; Rom.13:12).

We can see this in the elder son’s hands. One is dark, the other is light. He’s clearly struggling with the two sides of his nature.

Now, this isn’t Rembrandt’s only painting of the Prodigal Son.  Over a period of thirty years he etched, sketched and painted many different scenes from this parable.

In an earlier painting, The Prodigal Son in the Tavern [iii] (c.1637), Rembrandt portrayed himself as the prodigal son.  It shows him carousing with his wealthy wife Saskia, drinking from a huge wine goblet and wearing extravagant clothes. The peacock on the left symbolises vanity and opulence.

Rembrandt revelled in Saskia’s money, expecting it to last forever.  But Saskia died in 1642, aged only 32, and three children died as well. Then he took on a mistress, but Dutch society disapproved and he found himself shunned, unemployed and, in time, destitute.

To be prodigal is to be recklessly wasteful and extravagant.  Rembrandt saw that in himself.  His tragic life had left him broken and desperately needing mercy and forgiveness.  That’s why he painted The Return of the Prodigal Son.  He painted this masterpiece while suffering the agony of the death of his last beloved son, Titus. [iv]  It was an autobiographical statement.

But it’s also a word of caution for the rest of us, because Rembrandt’s situation isn’t so unusual today. Too many people continue to revel in self-love, self-indulgence and self-righteous pride.

Rembrandt saw himself in all three characters of this parable.   He was the younger son, ruined by self-indulgence.  And he was the elder son, guilty of resentful pride.  But he also knew that his biggest challenge was to become like the father.  Having suffered so much in the darkness, he understood the importance of having someone to turn to.

In Luke’s Gospel, Jesus tells us to ‘be compassionate just as your father is compassionate’ (Lk.6:36).  Henri Nouwen says that this is the core message of the Bible.  In his book The Return of the Prodigal Son, he explains how much he has learnt from Rembrandt’s tragic experience and he declares, ‘I now see that the hands that forgive, console, heal and offer a festive meal must become my own.’ [v]

This is our challenge, too.

Or are you now the wise and compassionate parent, offering unconditional love and acceptance to those who suffer?

[iii] This painting is also known as The Prodigal Son in the Brothel, as The Happy Couple, and as Rembrandt and Saskia in the Parable of the Prodigal Son.