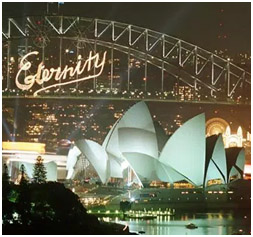 Every year at midnight on New Year’s Eve, dazzling fireworks explode over Sydney Harbour, and as bright colours light up the sky a giant image appears on the Harbour Bridge.

In 1999, that image was one word: ‘Eternity’, written in classical handwriting.

There’s a story behind that word.  It begins with a man named Arthur Stace, born in 1884 in a slum called Balmain.  His family was poor; they were alcoholics and often in gaol, so young Arthur had to look after himself.   To hide from his father he slept under the house. To eat he had to steal food or raid rubbish bins.  He rarely went to school and he couldn’t read or write.

When he was 14 he got his first job, in a coal mine.  But he spent his pay in the pub and often got into trouble.  At 15 he went to gaol for the first time.

During WW1, when he was 19, he joined the army and fought in France.  He was partially blinded by poison gas, and when he came home he returned to drinking and breaking the law.

In 1930, during the Great Depression, he found himself in court. The magistrate said to him, ‘Don’t you know I have the power to put you in gaol, and the power to set you free?’  ‘Yes, sir’, Arthur replied.  But it was the word ‘power’ that got him thinking.  What he needed was the power to give up alcohol.

Soon afterwards, Arthur went to St Barnabas’ Church in Broadway looking for free food.  There in the church, he decided it was time to change.  He went down on his knees and he prayed for the power to change his life.

His life did change.  He soon gave up drinking and he found a job.

Later on, in Darlinghurst, Arthur heard a sermon about eternal life.  Referring to Isaiah 57:15, the minister preached ‘I wish I could shout ETERNITY through the streets of Sydney!’

That word ‘Eternity’ kept ringing in Arthur’s ears.  When he left the church, he cried and he felt a great urge to write that word down. Remembering that he had chalk in his pocket, he bent down and wrote ‘Eternity’ on the footpath.

For the next 37 years he wrote ‘Eternity’ wherever he went, first with chalk, then with crayon because it lasted longer. In all, he wrote that word over half a million times.

He died in 1967, aged 83, but he never understood how he could write this word, because he was illiterate.  The only explanation he had was that God wanted him to do this.

Jesus changed Arthur’s life.  Jesus gave him hope for heaven, and Arthur wanted everyone to start thinking about their own eternal life.

Arthur wanted everyone to start thinking about their own eternal life.

This is what today’s Gospel is about.  First Jesus mentions two tragic incidents, and makes the point that God did not cause these people’s deaths.  God does not punish people in this life, he says.  God loves us.

Then Jesus tells his Parable of the Figs, in which the owner of a fig tree wants to cut it down because it has produced no fruit for 3 years.  The gardener, however, wants to give it another chance.  He promises to dig around the tree and fertilise it, and if it still bears no fruit, he says then it should be cut down.

This parable is about us.  So many of us have little or no spiritual life; we bear no spiritual fruits.  Jesus wants us to start fertilising our own personal spiritual tree, so that we might become more fruitful.

Ask yourself – do you want to go to heaven or not?

God is patient with us, but we don’t have all the time in the world.  For some, this is their last year and their last chance to prepare themselves.

God is love.  He loved Arthur Stace and he loves us too.  But true love is never a one-way street.  God’s love will never be complete unless we love him in return.

Today the word ‘Eternity’ is permanently displayed by the waterfall in Sydney Square.  Let’s remember Arthur Stace and his story.

But let’s also start thinking about our own eternity.