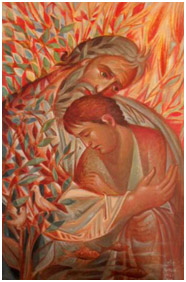 On the Greatest Story Ever Told

An angry young man once lived with his parents on a country property.  He was always fighting with his dad.  One day he shouted at him, ‘That’s it!  I’m leaving home!’

His father was upset, and replied, ‘Son, if you leave like that, don’t bother coming back!’

Well, the son did leave, slamming the door. But things didn’t go well for him.  He wandered from town to town, looking for work, drinking and getting into trouble. One night he was with friends.  They were all broke and they decided to rob a store.  But they were caught and sent to gaol.

The young man became really miserable.  Later, he wrote to his parents, telling them what he’d done and apologising sincerely.  He said that he’d understand if they didn’t want to see him again.

He also said that when he’s released he’ll be given a train ticket.  He wanted to catch the train that goes past their house.  If they’d like to see him again, perhaps they could tie something white to their tree near the train line.  If he sees nothing, he’ll just keep going and they’ll never see him again.

Well, the time came and the young man did get on that train.  He was so nervous.  As he got closer and closer to his old house he became even more agitated, pacing up and down the aisle.  At one point he couldn’t take it any more.  He asked another passenger, ‘My house is just ahead.  Could you please see if there’s anything white tied to a big tree?  I just can’t look’.

The passenger agreed and looked out the window.  As the train rounded the bend, he saw the most amazing sight.  He called out, ‘Look!’

There in a field was a large tree, simply covered with white sheets and towels and shirts and table cloths, all flapping in the wind.  His parents had emptied their linen cupboard of everything white and tied it all to that tree.  They wanted him back.

The young man jumped off the train and rushed to see his parents. They gave him the most loving welcome, much greater than he’d ever imagined.

This is what God’s love is like.  God always loves us, even when we turn away from him.  He will always welcome us back.  How do we know?  Because Jesus tells us so.  He says so in his Parable of the Prodigal Son.

When Charles Dickens was asked about the greatest story ever told, he said it’s this one, the story of the Prodigal Son.

In today’s parable there are two sons.  There’s the younger son who’s unhappy and wants to leave home.  He asks his dad for his share of the estate.  He goes into town and wastes it all.

… a prodigal son is someone who’s wasting something valuable. That’s something we should think about.

Then there’s the older son. He stays at home and works hard, but he’s also unhappy.  He resents his family and he refuses to join the celebration.

So, who’s the real prodigal son?  Well, they’ve both been wasting the many graces their father has given them.  But in the end it’s the one who refuses to come in and accept his father’s love.  The younger son has learnt his lesson.  He has changed.  But the older son hasn’t learnt how to love.  He hasn’t learnt how to forgive.  His heart is stubbornly closed.

Are you like the prodigal son?  Are you wasting the love God has for you?

Jesus once told St Faustina about the mercy he wants to give the world, if only we will believe in His love.  This is a remarkable invitation, but many of us barely give it a moment’s thought.  What a waste!

We might come to Mass, hear the Gospel and receive our Lord in the Eucharist, but so many of us just walk away afterwards, unchanged.  Jesus is calling us to change our lives and open our hearts up to him, but so many of us aren’t interested.

What an incredible waste!

When Jesus died on the Cross, that was God’s way of emptying heaven’s linen cupboard of everything white.  The Cross is God’s tree.  It’s his way of showing that he wants us home with him.

It doesn’t matter what we did before.  God is calling us from that tree.