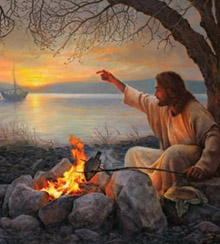 On Feeding my Lambs

In today’s Gospel Jesus is at Tabgha, a quiet beach on the northwest shore of the Sea of Galilee.  Jesus knew it well.  It’s 3km from Capernaum and his Sermon on the Mount and his miracle of the loaves and fishes occurred nearby.

In ancient times Tabgha was called Heptapegon (‘Place of Seven Springs’). These are hot springs that still flow into the lake today, feeding algae and attracting fish.

Peter and the disciples have been night fishing, but caught nothing.  At dawn, as they return to shore, someone calls out and tells them to cast their nets on the other side.  They don’t recognise Jesus, but he must have sounded important because they do what he says and they catch lots of fish.

This story’s very similar to Luke 5:1-11, when Jesus tells Peter, James and John to cast out into the deep and they catch a huge haul of fish.  Luke’s story is at the start of Jesus’ public ministry; but today’s story is from John’s last chapter.

Both stories use fish as a metaphor for souls.  In Luke’s Gospel, Jesus calls on his disciples to be ‘fishers of men’.  In John’s Gospel, we’re told that they caught 153 fish.  Many have wondered what this number means.  Some think it refers to Aristotle’s teaching that there were 153 species of fish in the sea.  If that’s true, then this number represents all people and Jesus is telling his disciples to bring everyone to him through his Church.

So, Jesus is there on Tabgha’s pebbly beach, cooking a breakfast of fish and bread over a fire.  He invites his disciples to join him.  He then takes the bread, blesses it and gives it to them.  This meal is clearly Eucharistic.  Jesus shared many meals with his disciples, and whenever they ate with him and listened to him, they were nourished and their relationship with Jesus was strengthened.

Today at Tabgha there’s a small grey-stone church by the shore.  It’s called St Peter Primacy.  Inside, in front of the altar, there’s a large flat limestone rock called ‘Mensa Christi’ (‘Table of Christ’).  Tradition tells us that this is where Jesus cooked and ate this meal with his disciples.

Now, after breakfast, Jesus takes Peter aside and asks him three times, ‘Do you love me?’  Each time Peter replies, ‘Yes, Lord’.  Jesus is giving Peter a chance to undo the three times he denied him.

But Jesus does something else as well.  He says to Peter, if you really love me, then ‘feed my lambs’ and ‘take care of my sheep’.  With these words he’s telling Peter to lead his universal Church, and that’s why that little church in Tabgha today is called ‘St Peter Primacy’.  Peter is given responsibility for leading Jesus’ church.

We know that Peter takes that command seriously, because in our first reading today he confronts the Sanhedrin, the Temple leaders who crucified Jesus.  Previously Peter was terrified of them; that’s why he denied Jesus three times.  But now he’s a changed man.  He’s filled with authority and, empowered by the Holy Spirit, he stands up to them.

Well, then, do something about it. Take care of my people.

So what does all this mean for us?

Well, the Gospels weren’t written for the Apostles.  They were written for you and me, and what applied to Jesus’ disciples back then also applies to us today.

Remember what Jesus says, ‘My flesh is real food and my blood is real drink.  He who eats my flesh and drinks my blood lives in me and I in him… this is the bread come down from heaven … he who eats this bread will live forever’ (Jn.6:55-58).  Jesus is truly present in the Eucharist.

And just as Jesus asks Peter, ‘Simon, son of John, do you love me?’ He asks us the same question.

And when we reply like Peter, ‘Yes Lord, I love you’, he also replies to us, ‘Well then, do something about it.  Take care of my people’.

When we receive Jesus’ Real Presence in the Eucharist, he’s also calling us, just as he called Peter, to go and take care of his people.