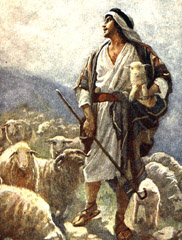 On the Good Shepherd

Today’s Gospel is short – very short.  It only has 8 lines and 63 words, but its message is deep:  Jesus tells us he’s the good shepherd who leads his sheep to eternal life.

Some people don’t like being called sheep; they think they’re stupid animals. But sheep are smarter than we think.  Yes, they do have a strong flocking instinct, but that’s how they’ve learnt to protect themselves from predators.

In fact, scientists tell us that sheep are sometimes smarter than monkeys. They can recognise colours and symbols, as well as faces and facial expressions.  They can also navigate complex mazes.

When Jesus said ‘My sheep hear my voice; I know them and they follow me’, he knew what he was talking about.  Every night in Palestine, shepherds gathered their animals into folds to protect them from danger.  Quite often several shepherds used the same enclosure, but the sheep never got mixed up. Each morning they really did recognise their shepherd’s voice.  The shepherd would walk off, talking to them or calling them by name, and they’d follow.  The sheep would never follow a stranger.

In his book, A Turtle on a Fencepost (1980), Allen C. Emery writes about the night he spent in the country with a shepherd who had two thousand sheep.  As the stars filled the night sky, the shepherd lit a bonfire to cook dinner and the sheepdogs slept in its warmth.

Suddenly Emery heard the call of a wild dog in the distance. The sheepdogs were off duty and the shepherd worried.  He got up quickly and tossed some logs onto the fire.

In this firelight, Emery looked out at the sheep and saw thousands of little lights.  Emery writes, ‘I realized that these were reflections of the fire in the eyes of the sheep. In the midst of danger, the sheep weren’t looking out into the darkness … (they) were keeping their eyes set toward the shepherd’.

So, sheep are smarter than we think.  When there’s danger about, sheep always keep their eyes on the shepherd.

But sheep are also noble animals.

In ancient times, people thought there was a similarity between sheep and honourable men.  Back then, personal and family honour was critically important.  It was a man’s responsibility to protect his family’s honour, even to the point of death.  If there was any risk of death, then an honourable man was expected to suffer it in silence, without complaining.

Now, people noticed that that’s how sheep behave, because whether they’re being shorn for wool or prepared for slaughter, they’re always quiet.  It’s because of this that Isaiah (53:7) describes the ideal servant of the Lord as being ‘like a lamb that is led to the slaughter … like a sheep that before its shearers is silent’.

In other words, like sheep, good disciples don’t readily complain.  And Jesus never complained when he suffered.

Sheep, then, are smart and noble creatures.  They deserve our respect.

In today’s Gospel, Jesus says that the Good Shepherd does three things for his sheep. Firstly, he knows his sheep well.  Secondly, he keeps them safe from harm, and thirdly, he leads his followers to everlasting life.  He says his sheep know his voice and they follow him.

This means that Jesus knows each of us personally.  He loves us and protects us, and wants to lead us to eternal life.  And, like sheep, we must learn to recognise his voice and follow him.

But it’s not so easy to hear Jesus’ voice these days, is it?  There’s so much noise about and life isn’t easy.  There are wolves out there and people are vulnerable.  If we drift through life like lost or stray sheep, then we’re certainly in danger.

But if we keep our eyes on the Good Shepherd, when we listen to his voice and follow his lead, then we’re sure to be led not only to safety, but also to greener pastures.

So, sheep are smart and noble creatures.

Today, on Good Shepherd Sunday, let’s listen for the voice of the one true Shepherd.  He’s calling us.