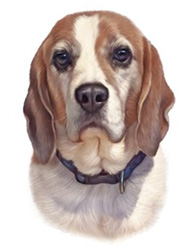 The Hound of Heaven

What hope is there when we really mess up our lives?

Francis Thompson (1859-1907) certainly messed up his life. He was born in Preston, England into a well-to-do Catholic family.

Francis feared his father’s anger, and tried to escape by joining the army, but they wouldn’t accept him. So, he fled to the slums of London where he lived on the streets and sold matches to feed himself.

Francis seemed to fail at everything he tried. But there’s one thing he truly did love: writing. He wrote poetry on whatever scraps of paper he could find, and his hunger and suffering sharpened his poetic insights.

After some years of homelessness, he became suicidal and one day a prostitute found him collapsed on a street. She rescued him and gave him a place to stay.

This was a turning point in his life.

In 1888, he sent a grimy and tattered manuscript to a Catholic periodical. The publishers – a married couple – were impressed by his work. They took him in and cared for him, and in 1893 they published his first book, simply called Poems. It included his masterpiece; a poem called The Hound of Heaven. [i]

In 182 lines, it tells the story of a man who tries to escape from God because he’s frightened that he’ll lose his freedom. It begins:

I fled Him, down the nights and down the days;

I fled Him, down the arches of the years;

I fled Him, down the labyrinthine ways

Of my own mind; and in the mist of tears

Like so many others, Francis had made a mess of his life, and in his guilt and fear, he fled from his family. But in this poem, he realises that it’s actually God he’s been running from. And he discovers that God is very much like a faithful hound chasing after a hare: searching relentlessly and never stopping until he actually finds it.

After years of pain and suffering, Francis had learnt that whenever and wherever he tried to hide, God’s love and mercy was always there, searching for him.

He had run into the slums of London, into hunger, dirt, addiction and disease, but still the hound of heaven was there, pursuing him with all ‘deliberate speed’.

Through his father, God had sent Francis some money via a London library. Through a prostitute, God rescued him from the streets and gave him a home.

Through a generous couple, God helped Francis publish his first book and gave him even more care. And later, when he moved to a Franciscan monastery in the south of England, he was helped to overcome his addiction.

To be prodigal is to be recklessly wasteful. Francis Thompson had squandered the blessings of his early life, and fell into darkness and misery, just like the younger son in Jesus’ Parable of the Prodigal Son. And just like the Prodigal Son in today’s Gospel, Francis found unconditional love and forgiveness.

So many people today think of God as someone or something distant, perhaps like a mountain waiting to be discovered by intrepid religious searchers.

But that’s not God at all. He is so much more like Francis’ Hound of Heaven, tirelessly searching for the lost and the frightened, always eager to embrace them with his love.

He’s so much more like the father in Jesus’ famous parable, anxiously awaiting his child, and celebrating mightily when he arrives.

The Apostle Peter once asked Jesus how many times he should forgive someone who sins against him. Seven times should be enough, Peter thought. But Jesus answered, ‘I tell you, not seven times, but seventy-seven times.’

This is how much God loves us, even when we’ve really messed up our lives.

In the end, Francis Thompson did find happiness. He published three books of poetry and several other stories and essays, but his health was always fragile. He died of tuberculosis in 1907, aged only 47. [iii] [iv]

This Lent, let’s remember that God is the Hound of Heaven, tirelessly searching for us, and always offering his grace and love, regardless of our mistakes.

(For a modern adaptation of this poem, go to: http://www.teleiaphilia.com/a-modern-adaptation-of-thompsons-hound-of-heaven/)