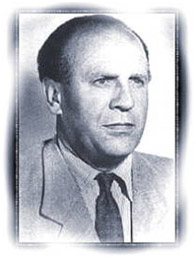 Oskar Schindler (1908-74) was a Czech businessman and German spy who joined the Nazi Party in 1939.  That year he also started managing a factory in Krakow, using Jewish labour.

In the beginning, he was an amoral, hard-drinking womaniser and gambler who loved making money.  But through the war something inside him changed.  He began noticing how poorly the Jews were treated.

At first he took an interest in his workers, helping them and protecting them where he could from Nazi cruelty.  Then he started bribing the Nazis to let him recruit Jews for his factory.  He also lied and forged and swindled to save as many people as he could from the gas chambers.

Schindler had two factories. One made pots and pans; the other ammunition.  But he made sure they were both inefficient, undermining the Nazi cause.  In 1944 his ammunition factory only produced one load of live shells; the rest were all faulty.

By the war’s end, Oskar Schindler had spent his entire fortune saving 1,200 Jews.  In 1963, Israel’s Yad Vashem Institute declared him ‘Righteous Among the Nations’.  And at his request, when he died penniless in 1974, he was buried in the Catholic Cemetery on Mount Zion in Jerusalem.

Now, how do we explain his transformation from a Nazi profiteer to a veritable saint?  Well, firstly, this change wasn’t overnight.  Indeed, there was no single moment when he decided to save people.  As David E Crowe writes, it was a gradual process of change over three or four years, and especially during the last two years of WWII when he experienced a dramatic moral transformation.[i]

Oskar Schindler changed because God spoke to him through his eyes and ears, and through his heart and conscience.  He saw, he listened, and he responded.

Oskar Schindler changed because God spoke to him.

And as he slowly changed from within, he became absolutely determined to save as many lives as he could, regardless of any personal and financial risks.

So, why do I tell this story?  It’s because it’s a good example of how God calls us all to conversion.  And it’s a process that’s replicated in Luke’s Gospel today.

Jesus is teaching on the shore of the Sea of Galilee.  Simon Peter and his friends can see Jesus as they clean their fishing nets nearby.  Then Jesus asks Peter if he can use his boat. Peter’s reluctant; he hardly knows Jesus.  But Jesus did cure his mother-in-law, so he agrees.  They go out into the bay, where Jesus teaches from the boat. And later, Jesus asks Peter to go fishing.

Now Peter’s really hesitant.  He’s fished all day and caught nothing.  But he does respect Jesus, so he reluctantly agrees.  He drops his nets and catches so many fish that he’s astonished.  He’s in awe of Jesus, and thinks, ‘I don’t deserve this’.  He starts to feel unworthy and says, ‘Go away from me Lord, for I’m a sinful man’.  The boat almost sinks and the men are frightened.  But Jesus reassures them.  They return to the shore and there Jesus calls them to become his disciples.  ‘From now on’, he says, ‘you’ll be fishers of men’.

In both of these stories, we can see that the process of conversion is gradual.  It begins by simply observing, watching the action from a distance.  Then it involves listening to what’s being said, and allowing it to move our hearts.  After that, it involves gradually accepting small commitments within our comfort zone, helping here and there.

Then we’re amazed when the call becomes specific and deeply personal, and something powerful happens inside us.  We start to feel unworthy, even sinful, and perhaps scared.  But then we’re reassured.  And that’s followed by acceptance, and finally, personal commitment.

These are the steps we all typically go through in the process of conversion, as we’re gradually drawn into the life of Jesus Christ.  Think about it.  Reflect on it.

The process of Christian conversion may seem scary, but it shouldn’t because it’s a journey into love.  St Therese of Lisieux said that it’s only the first step that costs us anything. What is that cost?  It’s the pain of change.  After that, everything else becomes much easier.

Over 7,000 people today are directly descended from the 1,200 Jews Oskar Schindler saved from death.

Right now, Jesus is calling you to make a difference.  Are you listening?