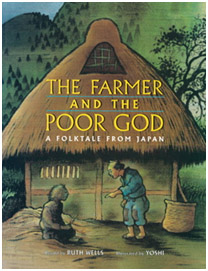 On the Farmer and the Poor God

[Shinto Japan has many gods: a god of good fortune, a god of places, of fire and wind… ]

There was once a struggling farmer who had four children. They were always fighting and yelling and there was never enough to go around.

The farmer didn’t work hard, but he did what was necessary to get by, so life was often hard.

One day his wife complained, ‘Our lives are so awful.  We must have a poor god’.  And they did.  They had a poor god.  He lived in their dusty attic as he watched over the family.

Yes,’ said the farmer, ‘That’s why we’re like this.  We should get rid of our poor god.’  So they planned to run away from him and start again somewhere else.   They packed their things and went to bed, waiting for the morning.

But the farmer couldn’t sleep.  He kept dreaming about being rich.  He got up quietly and walked to the porch in the moonlight.  There was a stranger, making sandals from straw.  ‘Who are you?’ demanded the farmer, ‘this is my porch.’

‘Why, I’m your poor god from the attic,’ he replied, ‘I’m making sandals.  You’ll need them tomorrow.’  The farmer cried, and said to his wife, ‘The poor god knows we’re trying to escape.  Now we’ll never get away!  Poor gods never let go.  We’re doomed.’

The next morning, the husband and wife felt miserable, while the poor god kept making sandals.  He gave each child a pair, and then made more, hanging them from the porch rafters.  Someone came by and admired the sandals.  The poor god was touched.  No-one had ever cared about him before.  He gave him a pair.  Then others came by, and they received sandals, too.

Seeing this, the farmer’s wife said, ‘We should at least charge a sack of rice.’  So, the next day the farmer took some sandals into town and returned with three sacks of rice, a new hoe, a chicken, a cooking pot and some sweets.

Then the farmer said to the poor god, ‘Keep working, we need many things.’  The poor god said, ‘Gladly, but I’ll need help with harvesting, collecting straw and mixing the dye colours.’

So they all started working.  The children collected the straw, the wife mixed the dyes and the farmer made sandals of different designs.

Slowly, things changed.  They all became happy, and the poor god put on weight.

What truly gives us life? Is it possessions? Is it anything that can be bargained, bought or sold?

Then they prepared their house for the feast of Shogatsu, and the arrival of the god of good fortune.  (The Japanese celebrate New Year by opening their front doors to welcome new gods.)

The farmer was sure he’d become rich, and the poor god started packing his things.  The rich god would replace him shortly.

That night, as the poor god headed for the door, the family cried, ‘Don’t go!’  But the poor god replied, ‘I must, otherwise the rich god can’t come in.’  And then the rich god arrived, wrapped in his kimono and jewels, looking fat and proud.  The rich god said, ‘Yes, it’s time for you to go.  This is my family now.  Out, out!’

But the farmer said, ‘I’ve made a terrible mistake.  I thought I wanted to be rich, but I’m already rich.  My wife laughs and sings, my children work together, and I love making sandals.  You have to stay, poor god… we need you.’  They pushed the rich god out the door, and hugged the poor god.

They lived happily ever after, and every New Year they locked their door, and told everyone how they were saved.  The farmer said, ‘Thank heavens for the poor god.  Lord knows where we’d be if it wasn’t for the poor god.’ [i]

Now, this story is about us.  In today’s Gospel, Jesus warns, ‘Woe to you rich.’  This might seem a strange thing to say when everyone today wants to be rich.

But here’s the question:  What truly gives us life?  Is it possessions?  Is it anything that can be bargained, bought or sold?

What gives us life is love.  The love we find in our homes, our families and our friends.  Love is what truly transforms lives.

That’s why Jesus warns us, ‘Woe to you rich’.

Jesus is our poor God.  Lock your doors; don’t let him leave.