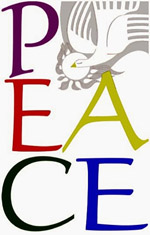 In John’s Gospel today, Jesus is talking with his disciples just after the Last Supper.  He knows he’s going to die and that his disciples are scared and confused.  So he says to them, ‘Don’t be troubled or afraid … my peace I leave with you, my peace I give to you.  A peace the world cannot give, this is my gift to you’.

The peace Jesus offers us isn’t the same as worldly peace.  Worldly peace typically is temporary; it’s fragile and it’s conditional.  In many places, peace is simply the absence of trouble and war, and it often depends on fear and armed force to enforce it.  Such peace usually has conditions attached, and it only lasts while these conditions are kept.

Jesus’ peace is different.  It’s unconditional; it’s an eternal and spiritual gift, and there are no strings attached.

So how can we get some of this peace?

Well, the first thing to note is that the peace of Christ doesn’t come from any human effort.  Some people think that all they have to do is properly organise the world around them, and then they’ll have peace.  But true peace isn’t external, it’s internal.  It’s not based on order or control.  It’s not based on fear or strength.  True peace is based on love and surrender.  It’s about letting go.

Jesus’ peace is like the calm at the bottom of the ocean.  Storms may be raging above, but there’s a wonderful calm deep below the surface.

The true peace of Jesus is a free gift that’s only available to those who have a close, loving relationship with him.  When you genuinely ask Jesus to enter into your heart and life, God’s peace will come flooding into your soul.

The second thing to note is that apart from any peace for ourselves, each of us also has a responsibility to help spread peace wherever we may be.

Think about this.  How much peace do we really bring into the lives of others?  Some people live under a delusion.  They think they’re living kind, considerate and sensible lives, but really they’re doing just the opposite.  Their actions and attitudes work against peace.  They’re actually making others unhappy and they’re unaware of the difficulties they’re causing.

Sometimes we think we’re doing the right thing, but we’re not.  Sometimes we miss the obvious.

When Jesus spoke about peace, the word he used was ‘shalom’ which means much more than peace as we know it.

Consider the case of Alfred Nobel.  He was a wealthy Swedish chemical engineer and inventor in the 1800s.  He spent much of his life developing things like artificial silk and synthetic rubber and leather.  He was very successful and fabulously wealthy.  He had more than 90 factories, and laboratories in 20 countries, and he held 355 patents.

In 1866 he invented dynamite.  He named it after dynamis, the Greek word for power.  But he didn’t expect it to be used for war.  He thought it would be used for peaceful purposes like construction – blasting rock and building tunnels and canals.  But he was wrong, and in 1870 it was used in the Franco-Prussian War … and in every other war since then.

In 1888, Alfred’s older brother Ludvig died.  A French newspaper thought it was Alfred himself who had died, and it published his obituary instead. It described him as the ‘merchant of death’ and said he’d become ‘rich by finding ways to kill more people faster than ever before’.

Alfred was horrified.  He didn’t want his life to be remembered that way, so he decided to change it.  To relieve his conscience, he began supporting the international peace movement, and when he died in 1896, he left most of his wealth to fund the Nobel Prize, the award for scientists and writers who work to foster peace.

Alfred Nobel said that every person should have the chance to correct his own obituary midstream and to write a new one.

What about you?  What would you like your obituary to say?  Are you a peacemaker?  Or do you need to change the way you live?

When Jesus spoke about peace, the word he actually used was ‘shalom’, which means much more than peace as we know it.  ‘Shalom’ is a very rich Hebrew expression which speaks of completeness, wholeness, fulfilment and everything in life being as it should be.

This kind of peace isn’t a place.  It’s a loving relationship with God, and this is the free gift that Jesus offers us today.

‘My peace I give to you,’ says Jesus.