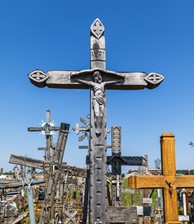 The Hill of Crosses

In Northern Lithuania, two and a half hours’ drive from Vilnius, the capital, there’s a place called the Hill of Crosses. It’s a small hill in the middle of green farmland, densely covered with countless thousands of crosses of all shapes and sizes.

For hundreds of years, this hill has symbolised the deep Christian faith and independent spirit of the Lithuanian people. Every day, people go there to pray and reflect, and to add new crosses.

Among these crosses, there’s a statue of Jesus sitting under a roof, praying quietly. His sad face represents the millions of Christians who for years could only worship in secret under Soviet Russia.

The Soviets hated this hill; they bulldozed it and burnt the crosses many times. But despite the risks, the people kept returning. In 1973, after again bulldozing it, soldiers started guarding this hill, but still the locals returned late at night to plant new crosses. [i]

Today as we celebrate the joy of Easter, we are reminded that millions of people around the world cannot express their religious faith freely. They cannot do what we’re now doing: celebrating Jesus’ Resurrection and promise of eternal life.

In too many places, people are told what to think and believe, and they’re punished if they disobey. From 1944 to 1953, over 500,000 Lithuanians were sent to suffer and die in the gulags of Siberia. [ii]

Happily, Lithuania regained its independence in 1990, and today the Hill of Crosses is a beacon for peace and a memorial to all who died for their faith. In 1993, St John Paul II celebrated Mass here, and gave thanks for the courage of the Lithuanian people.

Sadly, however, it’s now Ukraine that’s suffering under the boot of Russian repression.

Malcolm Muggeridge (1903-90), the British author and TV personality, visited the Soviet Union in the 1930s, at the height of Stalin’s reign of terror. Working as a journalist, he felt deeply for the ordinary people in their suffering, particularly in Ukraine where ten million were cruelly starved to death in an artificial famine. [iii]

On Easter Sunday in 1933, he visited a church in Kyiv and was amazed. ‘What a congregation that was,’ he wrote, ‘packed in tight, squeezed together like sardines in a tin.

‘I myself was pressed against a stone pillar, and scarcely able to breathe. So many grey, hungry faces, all luminous like an El Greco painting, and all singing. How they sang, about how there was no help except in Christ, nowhere to turn, except to him; nothing, nothing that could possibly bring any comfort except Jesus himself.

‘I could have touched him then,’ Muggeridge wrote. ‘Jesus was so near – not up at the altar, where the bearded priests were, but among the people. He was one of the grey faces, the greyest and most luminous of all.’

Muggeridge said it was strange that the place where he found himself closest to Christ was the place where for fifty years the Christian faith had been ruthlessly suppressed; where the printing of the Gospels was forbidden, and where Christ was mocked by all the organs of the all-powerful state, just as the Roman soldiers mocked him 2,000 years before.

2,000 years ago, the cross was the terrifying symbol of Roman domination, and the threat of crucifixion kept rebels under control. But on Calvary, that very first Hill of Crosses, Jesus embraced that awful symbol and accepted that shocking death, and transformed them into the doorway to freedom and eternal life.

Today, the Hill of Crosses is a powerful symbol of hope. It represents the unquenchable thirst of ordinary people for truth and love, and it reminds tyrants that their day of reckoning is coming, because our loving God has demonstrated his awesome power.

As to Malcolm Muggeridge, he had long been a cynical atheist. But he changed after witnessing the brutality of communism and the profound faith of ordinary Ukrainians. He went on to discover Mother Teresa in Calcutta and he made her famous. And in 1982 he became a Catholic.

Today, there’s a war underway, but it’s not just in Ukraine. It’s a worldwide spiritual battle between truth and lies, between light and darkness, and between goodness and evil.

As life unfolds, remember the truth and beauty of the Hill of Crosses.