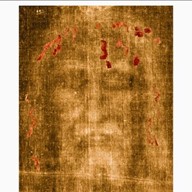 The Shroud of Turin

Apart from the Cross, nothing depicts the Passion of Christ more powerfully than the Shroud of Turin.

After Jesus died on the Cross, Joseph of Arimathea asked Pontius Pilate for permission to bury Jesus. Pilate agreed. He then bought a linen cloth, took Jesus down from the Cross, wrapped him in it and buried him (Lk.23:46-56).

John’s Gospel tells us that the Shroud was left behind when Jesus rose from the dead (Jn.20:5-7). And history says it was kept by Byzantine Emperors until 1204AD. It was then taken by Crusaders to France, and in 1578 it went to Turin, where it remains today.[i]

The Shroud has been studied countless times, and it’s been described as a supernatural photo negative of Jesus lying in the tomb, taken by God probably at the moment of his Resurrection. Measuring 4.3m x 1.1m, it bears images of his front and back, as it was placed under him and then pulled over his head to cover the rest of his body.

The Shroud depicts someone who endured everything that Jesus suffered: scourging, beatings, crowning with thorns, and nails through his wrists and feet.

Close analysis shows hundreds of wounds from scourging, and it reveals that Jesus was tortured by two soldiers, using two different whips, one with pieces of metal or bone embedded into it. The entire body is covered with these wounds, particularly the back, chest and hips.

The Shroud also shows evidence of the crown of thorns, but it didn’t have a hole in the middle. It was more like a cap covering the whole head, with long thorns causing significant pain and bleeding.

The legs show even more wounds, especially on and just above the right knee, possibly caused by Jesus falling on his way to Calvary. There’s also a large 10cm x 9cm injury on his right shoulder, probably caused by the rough Cross opening up the wounds from the scourging at the pillar.

On the left of his back, there’s another large wound, revealing that the Cross had torn his flesh. And it shows that three nails were used; one through each wrist, and one nail through both feet.

Many people think that the nails pierced Jesus’ palms, but his palms couldn’t have carried his weight. Standard Roman practice was to nail the wrists instead.

There’s also a serious chest wound, near his heart, and the bloodstain shows that it was inflicted after Jesus died.

The Shroud has long been controversial. In 1988, radiocarbon testing dated the Shroud to around the Middle Ages, but since then that test has been discredited. Today, most people accept the Shroud as genuine.

How do we know? Well, for a start, science has identified that none of the fluids on it could have been artificially applied. It’s not a painting. The wounds, the blood flows and the bloodstains are just too perfect.[ii] They behave exactly like the real thing, down to the last detail, and they mirror what the Gospels tell us.

As well, it’s not just ordinary blood we see; the different fluids could only have come from someone who died a traumatic death. And the blood type AB matches the blood found in many Eucharistic miracles.[iii]

Textile experts also say that the cloth’s weave matches another 1st Century fabric found at Masada. And 70 varieties of pollen were found on the Shroud, all from the Middle East. 38 of them came from within 80 km of Jerusalem, and 14 grow nowhere else. This confirms that the Shroud came from Palestine.

As well, the dirt found at the feet of the Shroud contains a rare form of calcium only found in caves near Jerusalem’s Damascus Gate.

The Catholic Church makes no claims about the cloth’s authenticity, but it does recognise it as a powerful symbol of Christ’s suffering. [iv]

In 1998, when St John Paul II visited Turin, he said that the Shroud is a mirror of the Gospel and a reason for deep reflection, for it helps us understand the mystery of God’s love for us. He also said that it invites us to model our lives on Jesus who sacrificed himself for us. [v]

It’s hard not to be moved by all this. The Gospels and the Shroud both reveal just how much Jesus loves us, and how much suffering he has endured for us.

They also remind us that there’s no hardship we could ever face that Jesus hasn’t already suffered – and more. He really does understand what we might be going through.

So, as Easter approaches, be sure to thank Jesus and tell him how much you love him.