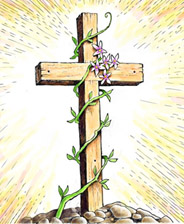 On the Heart of our Faith

Happy Easter! Today is the most important day of our Christian calendar, because this is the day we celebrate Jesus’ return from the dead.  The truth of Jesus’ resurrection is at the very heart of our faith.

Given its importance, then, why do so many people only rabbit on about chocolate eggs at Easter?

Let’s go back a step.  We don’t know exactly when Jesus was born, but we do know the month of his death and resurrection.  It’s linked to the Jewish Passover, which is always between late March and late April each year.

This is springtime in the Northern Hemisphere.  Have you heard of the mad March hare?  Springtime is when rabbits and hares leave their winter hiding places and rush about eating, nesting and multiplying.  Springtime is also when most wild birds lay their eggs.  In the 1600s, someone in Germany linked these two events and started making up stories about rabbit-eggs.

These are fairytales, however.  They simply distract us from the real Easter story.  So let’s look at that now.

St Luke tells us that at dawn on the first Easter, Mary Magdalene and two other women went to Jesus’ tomb with a gift of spices.  They were astonished to see it empty.  Two angels said to them ‘Why look for the alive among the dead?  He’s not here, he’s risen.’

The women ran to tell the disciples, but they wouldn’t believe it.  So Peter checked for himself, and all he saw in the tomb were some binding cloths.  Soon afterwards, however, Jesus appeared to them personally and then they had to believe.

The question today is this: do we believe?  And what does Jesus’ resurrection mean for us personally?  St Paul says that if Christ is not risen, then all our believing is in vain (1Cor.15:17).  But we know he’s risen, for several reasons.

It’s significant that all four Gospels say that women were the first to witness the empty tomb. This point gives credibility to these accounts, because in ancient times women weren’t allowed to be official witnesses.  Had the Resurrection story been invented, women would never have been mentioned.

It’s also significant that there’d been no forced entry into the tomb, and that Jesus’ linen wrappings were left on the floor.  If Jesus’ body had been stolen, the bandages would have gone, too.  But they were left behind.

What’s immensely profound, though, is the change in the disciples’ behaviour.

The author Henry Van Dyke once wrote that some people are so afraid of death that they never really begin to live.  This certainly applied to the disciples. At first they’re so terrified of arrest that they go into hiding.  But not long after Jesus’ resurrection they’re completely transformed.  They come out of hiding and start preaching with great passion.

What we’re now moving towards is life, not death.

St Peter, previously so weak, suddenly becomes a lion and fearlessly confronts the Jewish crowd.  He’s filled with fire and nothing will stop him.

St Paul the Pharisee also meets Jesus on the Damascus Road and he, too, changes utterly.  There’s no escaping it – Jesus is risen!

The Apostles’ conviction is so strong that no gaol or persecution or torture will stop them spreading the extraordinary news about Jesus Christ.

And it’s because of their passion, and the unshakeable faith of so many disciples since then, that we’re all here today, celebrating Easter.

So what does the Resurrection mean for us today?

Before Christ’s resurrection, death always followed life.  It didn’t matter how rich or powerful you were; death was always the end of the road.  But now, because of Jesus’ self-sacrifice, death is as empty as his tomb.  Death is no longer what we’re moving towards; it’s what we’re coming from.

As Christians we’re all members of Christ’s body, and because of our baptism Jesus has given each of us a share in his new life and identity.

Some people think that all they have to do is to sit tight, and wait for their turn to enter heaven.  But true Christians aren’t meant to do nothing.  True disciples, like Jesus, are meant to spread the good news.  We’re meant to make a difference, by shining some of Christ’s light into the darkness of the world.

So, Easter is not about rabbits and chocolate eggs.

The real story of Easter is the story of Jesus, his remarkable resurrection from death, and the profound hope he gives every one of us.