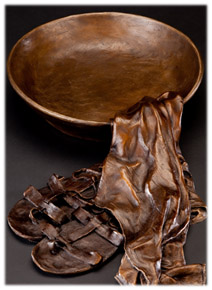 Years ago, a Carmelite nun went to see St Teresa of Avila, and said how she wished she’d lived in Jesus’ day.  What a joy, she thought, it would have been to see his face, to hear his voice and to be near him.  ‘Imagine what it would have been like to talk with Jesus!’ she said. ‘Oh, I’d be a saint!’

St Teresa looked at her and said, ‘My dear sister, have you forgotten that Jesus is still on earth, that he lives near you (she pointed to the tabernacle), and that he’s often in your very soul?  Have you forgotten that you can see him and speak to him as often as you like? And isn’t Jesus with us in the Most Holy Sacrament?’

Yes, Jesus is always with us in the Most Holy Sacrament, the Eucharist.

Recently I came across Robert DeGrandis’ book ‘Healing through the Mass’ [i].  In it DeGrandis describes how NASA studied the effects of space travel on astronauts and developed a special camera that can read the energy levels in a human body.  Linked to a monitor, this camera shows a person’s energy as an aura of light around the body.

In its experiments, NASA found that when someone’s dying, their aura gets thinner and thinner until that person dies.  One day in a hospital, a scientist and his associate were monitoring a dying man behind a two-way mirror.  Through their camera they could see another man entering the room. Light shone from his pocket.  The man took something from that pocket and moments later the whole room was filled with so much light that the camera couldn’t read what was happening. The scientists went into the room and saw the dying man receiving Holy Communion.  The Eucharistic host had radiated a huge amount of energy and the man’s aura got stronger.

After witnessing that event, the scientist himself became a priest.

So many of the graces God gives us are invisible to our world-weary eyes, and we never notice them.  But God’s graces are real; they’re powerful.

Today, on this feast of the Last Supper, we should remember three remarkable graces Jesus left us on the night before he died.

Firstly, Jesus washed his disciples’ feet.  As St John tells us, Jesus stood up from the table, took off his cloak, wrapped a towel around himself and washed their feet.  This startled the disciples; it was the work of slaves.  Peter objected, but Jesus replied, ‘If I don’t wash you, you can have nothing in common with me’.

Later, Jesus added, ‘Do you understand what I’ve done to you? … if I’ve washed your feet, (so) you also must wash each other’s feet.  For I’ve set you an example … you should do as I have done’.

So many of the graces God gives us are invisible to our world-weary eyes, and we never notice them.

This act was revolutionary.  Jesus showed us that regardless of who we are, we all need to reach out in humble and loving service to others.  This is the path of sainthood, and we’re all called to it.

Jesus’ second grace was also revolutionary.  He took the bread, blessed it, and gave it to his disciples saying, ‘Take and eat, this is my body’.  Then he took the cup of wine and said, ‘drink from this, all of you; for this is my blood, the blood of the new covenant’ (Mt.26:26).

This same miracle still happens today, at every Mass, and as NASA itself has found, the Eucharist has remarkable powers.  Indeed, it has the power to transform lives.

And finally, at the Last Supper Jesus gave us a third grace, by establishing the priesthood.  In 2004, Pope St John Paul II said that through these two actions – washing the feet, and instituting the Eucharist, Jesus established the ministerial priesthood.

Our priests are consecrated by God to make the love of Christ present in the world.  But as St Peter reminds us, we all share in that same priesthood.  We’re all a chosen generation, a royal priesthood, a holy nation (1Pet.2:5).

So, as we celebrate the Last Supper today, let’s remember that we all share in Jesus’ priesthood.

We all have a duty to make Christ’s love present in the world, by serving others in mercy and love, and by recognising his divine presence in his remarkable gift – the Eucharist.