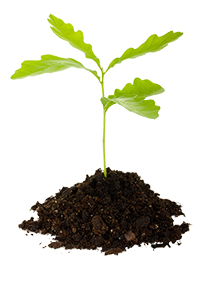 On Soils and Souls

Max Lucado, the American pastor and writer, says he sometimes gives money away at the end of a sermon – not to pay people, but to make a point. He offers a small, but free gift of cash.  All anyone has to do is take it.

The response is predictable, he says.  There’s usually a pause, some shuffling of feet. A wife elbows her husband, and he shakes his head. A teen starts to stand and then remembers her reputation. A child starts walking down the aisle, but his mother pulls him back.  And finally, a brave (or impoverished) soul stands up and says, ‘I’ll take it!’ and the money is given.

‘Why didn’t you take my offer?’ he asks. Some say they were too embarrassed.  Others thought there might be a catch, or their wallets were already full. [i]

There are other reasons, too.  Like pride, because it takes some humility to accept a gift.  As well, a gift can imply the need for change, and some people just don’t like change.  And accepting a gift can mean opening up to the giver, and some people won’t open up to anyone.

So, there are two sides to gift-giving: there’s the giving and then there’s the receiving. Jesus talks about this today in his Parable of the Sower.

A farmer lavishly scatters his precious seeds wherever he goes.  Some seed falls on the pathway and is eaten by the birds.  Some falls on rocky ground and starts growing, but soon withers in the hot sun.  Some lands in the thorns, where it’s choked.  And some seed falls on rich soil, where it produces a great harvest of fruit.

Now, who is the sower?  It’s God himself, and the seed he’s sowing is his divine love.  He’s spreading it everywhere, all the time, through his creation and through the work of Jesus Christ and the Holy Spirit.  It’s available to everyone, regardless of who we are.  And it’s not only free, but it’s also good and nourishing.

But it all depends on the soil.  And what is that soil?  It’s our hearts.  Are our hearts ready to accept this seed, this gift of God’s love?  Are our hearts deep and rich, like good soil?  Or are they hard and unyielding, like a roadway?

Are our hearts perhaps like rocky ground with shallow soil, where seeds struggle to put down roots?  Pope Francis says this rocky ground represents the person with a superficial heart, who receives Jesus and who wants to pray and love, but only when it suits him.  Such hearts will never bear fruit, he says.

Or are our hearts more like thorny ground, covered with brambles that choke the good plants?  Pope Francis says these brambles represent our worldly fixations, our desire for wealth and power. These things suffocate God’s growth in us.  We must get rid of these vices, he says, otherwise the seed of God’s love will never grow and blossom in us. [ii]

Now, note that no-one is forced to accept these divine seeds.  No-one has to accept God’s love. We’re all free to make our own choices. Love always respects freedom. [iii]

But God doesn’t give up.  As Isaiah says in today’s first reading, God’s word ultimately will be fruitful.  Like the rains that soften the earth and make it rich and fertile, so Jesus is constantly working in our lives, trying to break up the hard ground of our hearts.  He’s encouraging us to clear away the obstacles that choke our growth, preparing us for a rich harvest of love.

Max Lucado says that after giving away his free cash, he makes the point that God’s grace is available to everyone, but only a few accept it.  Many people would rather sit and wait, and only a few choose to stand and trust.

That’s usually the end of it, he says, but on one occasion he later met a woman who had accepted his gift.

He asked her if she still had that money. ‘No,’ she replied.

Lucado thought that was wonderful.  As simply as she had received, she gave. As easily as it came, it went.

The boy didn’t beg, and she didn’t struggle. How could she, who had been given a gift, not give a gift in return?

Her heart was good, rich soil and already that small seed had produced fruit.

How would you describe the soil of your heart?