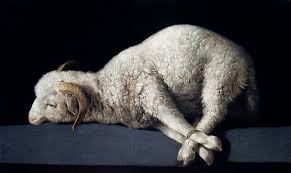 On Breaking Our Fall

In Madrid’s Prado Museum there’s a painting called Agnus Dei (‘Lamb of God’) by the Spanish painter Francisco de Zurbarán (1598-1664).  It depicts a young lamb on a grey slab, set against a black wall.  Its legs are tied and it’s ready to be sacrificed.

This powerful and confronting image symbolises the ministry of Jesus Christ.  But where does it come from and what does it mean?

To answer that we have to go back to ancient times, when many cultures worshipped God through animal sacrifice. They believed they were unworthy to approach God without first sacrificing something they considered valuable. So the Jewish people used to sacrifice lambs, but also bulls, sheep, goats, doves and even grains.

When the ancient Israelites were enslaved in Egypt, God heard their cry for freedom and at the Burning Bush he asked Moses to secure their release. But Pharaoh refused, so God sent a succession of plagues to soften his resistance.

Just before the final plague, God instructed every Jewish family to sacrifice a lamb and to paint its blood on their door posts.  This was culturally appropriate for the time, and it helped the Angel of Death to identify and ‘pass over’ their homes. Only then did Pharaoh allow them to leave (Ex.12:1-27).

Those sacrificed lambs meant new life for the Jewish people, as they journeyed from slavery to freedom in the Promised Land. They have been celebrating their ‘Passover’ ever since. [i]

The Gospel of John, from which today’s Gospel reading comes, often alludes to the Passover.  It begins with John the Baptist announcing Jesus’ arrival to his disciples: ‘Behold the Lamb of God, who takes away the sin of the world!’  And it ends with Jesus being crucified at the very same time that the lambs are slaughtered in the nearby Temple.

John’s message to us is clear:  Jesus is the ultimate and perfect Lamb of God.

Now, the problem with the Law of Moses and its prescriptions for animal sacrifice is that the people never changed.  They just continued living their sinful lives (Heb.10:4; Rom.8:3).

A new, more effective, approach was required, so God sent his only Son to live among us, to teach us how to live.  He taught us that selfless love is the only necessary form of sacrifice.  But sadly, it resulted in his crucifixion.

Why did Jesus die on the Cross?  It wasn’t because God demanded a blood offering.  Not at all. Jesus sacrificed himself because that is the essence of true love (Phil.2:5-8).  We know from our own experience that we cannot truly love others without making sacrifices.  And losing our life for the sake of another is the supreme test of love (1Jn.3:16-18; Eph.5:1-2).  That’s why Jesus died.

The Franciscan theologian Richard Rohr writes: ‘In the Hebrew tradition, the Passover lamb was a perfect, unblemished sheep or goat that apparently lived in the family home for four days before it was sacrificed (Ex.12:1-8). That’s just long enough for the children to fall in love with the lamb’.

The innocent lamb, he says, symbolises not only the innocent Christ, but also the illusion of our innocent selves.  We must shed this false image if we are to grow spiritually, so it is precisely the beloved and innocent ‘lamb’ that must die.

Rohr adds that we must accept that we’re all complicit and profiting from the corporate ‘sin of the world’ and no one is pure or innocent. [ii]

We know that our world is full of sin, violence and corruption.  And we know that in the end our world cannot promise us anything other than the dark emptiness of death.

But Jesus wants so much more for us (Jn.10:10).  That’s why he showed us how to live a life of love, even to the point of making the ultimate sacrifice.  And it’s incredibly significant that he also rose again to new life.

Jesus’ selfless act is actually the new Passover from death to life: for him and for us all.

In Werden, Germany, there’s a church with a statue of a lamb on the roof. During its construction, a stonemason fell from the scaffolding.  His co-workers thought he’d died, but he survived. Some sheep had been passing below the tower and a lamb had broken his fall.   That lamb died, but the man was saved.

In gratitude for saving his life, the stonemason carved a statue of the lamb and placed it on the tower. [iii]

The perfect Lamb of God however has broken our fall.  Jesus has saved us.

But – only if we have faith and follow in his way.