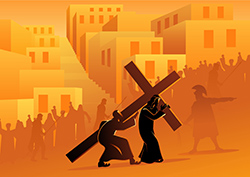 In their telling of the Passion of Our Lord, the four evangelists mention several people. One of them represents you and me.

He’s simply a passer-by, feeling hot and tired after walking into Jerusalem from the country. His sons Rufus and Alexander are with him, and he’s looking forward to celebrating Passover.

He notices many people about. Some seem happy, but others are crying. And there are Roman soldiers, looking irritated. ‘What’s happening?’ he wonders.

Then a soldier grabs him by the shoulder, and at spear-point forces him to help a bleeding man lift his heavy cross. This doesn’t look good.

The passer-by protests: ‘this has nothing to do with me!’ He doesn’t want to carry an instrument of torture; that’s humiliating. And he doesn’t want to touch that man’s blood. It will make him ritually unclean and shut him out of Passover.

But he has no choice. Resentfully, he steps forward to help this poor, weak man. For just a moment, though, they look at each other, and the passer-by senses this man’s innocence.

Simon of Cyrene then reaches down to lift that heavy load, and starts following Jesus of Nazareth. And as he does so, his life changes. Completely.

At first, Simon had thought that this was all just bad luck . But later, he understood that hidden inside that unwanted burden was the secret of his own salvation.

In his book The Passion and the Cross, Ron Rolheiser says that Simon of Cyrene was not central to the drama or the meaning of Jesus’ passion and death. He was actually an unimportant figure standing at the edge of things, when he was forced to play an unglamorous and self-effacing role. He had to sacrifice his own plans and he wasn’t happy about that. Yet this unplanned and humble service became the most important thing he ever did. It was his signature piece. It gave him a place in history far beyond that of millions of people who were once considered important in the drama of life.

Thousands of years from now, Simon of Cyrene’s name will be remembered, and for the right reason: he helped carry the Cross of Jesus. [i]

Jesus had hoped that his disciples, his closest friends, would be there for him. But they all failed him.

It was actually a stranger who helped him when he needed it most. That stranger was the answer to Jesus’ prayer there in the Garden of Gethsemane, when he begged his Father for help.

Sometimes the person who helps us most is just a passer-by.

Today, we live in a society that’s constantly urging us to take control of our lives, to do whatever we want. But we know that’s often impossible. We so often find ourselves doing things we never planned or wanted to do.

Perhaps it’s cleaning up someone else’s mess, or caring for an aging parent or disabled child, or having to find a new job, or facing an unexpected illness. We all have to bear such crosses.

But here’s the question: how do we respond?

Do we patiently accept these trials, and pray for help? Do we understand that such challenges help us grow in faith, love and maturity? And do we recognise that death on every holy cross is followed by resurrection and new life?

Or do we simply resent the inconvenience, and fight it all the way?

God loves us all, just as we are. But he loves us far too much to let us stay the same. He’s encouraging us to become better people.

Today, on Good Friday, we are reminded that Jesus is the way, the truth and the life. We must learn from him.

No-one is meant to suffer alone. No-one should have to carry their cross without help from someone else. And sometimes, like Simon of Cyrene, God calls on us to do the helping.

Yes, Jesus does ask us to pick up our cross and follow him. But Simon is the only man in history who actually carried Jesus’ Cross.

According to Church tradition, he and his sons became prominent Christian leaders. They may be the ‘men of Cyrene’ who preached the Gospel to the Greeks, as recorded in Acts 11:20. And St Paul praises Simon’s son Rufus and his mother in Romans 16:13.

Sometimes our crosses seem so random; so unnecessary. But as Simon discovered, the Cross of Christ wasn’t random at all.

The cross is always a divine gift; an invitation to change our lives.

And hidden inside every cross is the secret of our salvation.